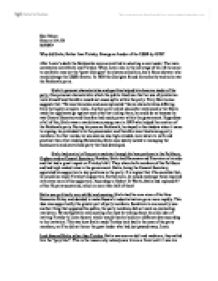 Why did Stalin, Rather than Trotsky, Emerge as Leader of the USSR by 1929?

Shai Manor History 12A IB 06/09/04 Why did Stalin, Rather than Trotsky, Emerge as Leader of the USSR by 1929? After Lenin's death the Bolsheviks were committed to selecting a new leader. The main contestants were Stalin and Trotsky. When Lenin was in the last stage of his life he came to see Stalin was not the "great Georgian" he always called him, but a fierce dictator who would change the USSR forever. In 1929 the Georgian forced his authority and took over the Bolshevik party. Stalin's personal characteristics and qualities helped him become leader of the party. One personal characteristic which the public liked was that he was of proletarian roots himself and therefore would not cause splits within the party. Terry Morris also suggests that: "He was blameless and uncomplicated." Some characteristics differing from the highly complex rivals. ...read more.

They where both members of the Politburo and had high ranked roles in the government. Stalin, being the General Secretary, appointed his supporters to key positions in the party. It is logical that if he could do that, he could also expel Trotsky's supporters. Furthermore, he would exchange those expelled with even more of his supporters. According to Robert D. Warth, Stalin had replaced 37 of the 50 party secretaries, which is more than half of them! Stalin was politically very skilful and cunning. Stalin had his own view of the New Economic Policy and decided to make Russia's industrialization grow more rapidly. This idea was supported by the greater part of party members. Socialism in one country was another thing that appealed the public; the party members did not want an everlasting revolution. ...read more.

Although Stalin was very powerful, Trotsky may be the reason for his own defeat. He had only joined the Bolshevik party in 1917; he was a Menshevik until then. Therefore he was not seen as a loyal party member. Furthermore, many Bolsheviks did not trust him and thought, since he had the army on his side, that he would try to become the dictator. Trotsky underestimated Stalin and therefore lost the power he could have had. He was seen as high-minded and arrogant, rude towards his colleagues and was seen as the person to make "splits within the party". Conclusion By the end of 1926 Trotsky was voted off the Politburo, and in October1927 he lost his place in the central committee. One month later he even got expelled from the Bolshevik party and was exiled in January of 1928 to Soviet Asia. Stalin then emerged as Lenin's full successor. Word count: 758 ...read more.