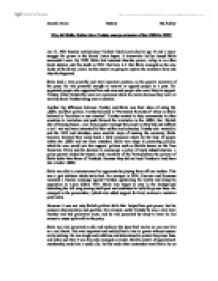 Why did Stalin, Rather than Trotsky emerge as leader of the USSR in 1929

Why did Stalin, Rather than Trotsky emerge as leader of the USSR in 1929? Jan 21, 1924 Russian revolutionary Vladimir Ilyich Lenin died at age 53 and a major struggle for power in the Soviet Union began. A triumvirate led by Joseph Stalin succeeded Lenin. By 1928, Stalin had assumed absolute power, ruling as an often brutal dictator until his death in 1953. But how is it that Stalin emerged as the new leader of the Soviet Union. In this essay I am going to explore the reasons to how and why this happened. Stalin held a very powerful and very important position, as the general secretary of the party. He was powerful enough to remove or appoint people to a post. He appointed people who supported him and removed people who were likely to support Trotsky. Older Bolsheviks were not concerned about his moves because they were all worried about Trotsky taking over as dictator. Another big difference between Trotsky and Stalin was their ideas of ruling the USSR, and their politics. Trotsky believed in "Permanent Revolution" where as Stalin believed in "socialism in one country". Trotsky wanted to help communists in other countries to revolution and push forward the revolution in the USSR. But Stalin's idea of helping Russia , was very popular amongst the people as they had just suffered a civil war and were interested in their welfare and economy. ...read more.

At first Trotsky was the most prominent character of the seven members of the Politburo. Initially he seemed as the most able of the two to become the new leader of the USSR, but what happened? I believe that there are many factors which imply that Trotsky himself was reliable for his own downfall. The first and most fundamental point I believe was the fact that Trotsky didn't like getting involved in the 'drudgery of politics'. This meant he was not as good as Stalin when it came to making allies and getting people on his side. The fact that Trotsky was not keen on placing the people that supported him in important positions, meant that there was no real opposition against Stalin that was united enough to cause a real threat. Another problem with Trotsky was that he was not seen by many of the Bolsheviks as a loyal member as he was an ex- Menshevik who joined the Bolsheviks (in August 1917) only when it was clear that this would be the winning side. Most of the Bolsheviks did not trust him and thought that he might try to emerge as dictator. The fact that he was not a 'real' Bolshevik angered Stalin, Kamenev and Zinoviev and they all formed a triumvirate, where they all joined together to keep Trotsky from gaining power. ...read more.

This was a huge point in Stalin's favour. The factor of luck I believe also aided Stalin in gaining votes at the time of the elections. In conclusion I believe that there were a number of reasons as to why Stalin was successful rather than Trotsky, even though he had planned the November revolution and led the Bolsheviks through the civil war. Trotsky was the only person who could speak and think of ideas on carrying out revolutions, like Lenin where as Stalin was nothing like him infact he was a very boring spokes person. He was seen as a dull and a mediocre person. However Trotsky was regarded as an arrogant person and he did not spare time for the people who he considered stupid. This was one drawback that made other communists give a vote against Trotsky. Also I believe that one of the most important reasons to why Stalin emerged as leader was because of his position as General Secutary where he was able to appoint his own supporters to high positions un the party, and dismiss others, he fundemetally controlled membership. And so thi smeant that he was able to come to power. Another very important reason I believe is the fact that Stalin was able to exploit his oppsitions weaknesses (especially those of Trotsky). By doing this Stalin was able to remove any real opposition and in December 1929 Stalin celebrated his Fiftieth birthday as the new undispuited leader of the USSR. Ms.Ardley History Zeenah Araim ...read more.