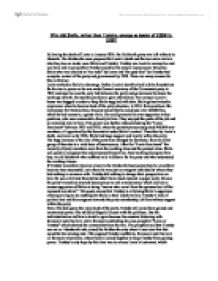 Why did Stalin, rather than Trotsky, emerge as leader of USSR in 1929?

Why did Stalin, rather than Trotsky, emerge as leader of USSR in 1929? Following the death of Lenin in January 1924, the Bolshevik party was left without its Messiah. The Bolsheviks were prepared for Lenin's death and the two main rivals to take his place as leader were Stalin and Trotsky. Trotsky was Lenin's accomplice and war hero and it seemed that Trotsky would be the natural replacement. However, Stalin who was labelled as "too rude" by Lenin and "the grey blur" by Trotsky had complete control of the party and government by 1929. There are many reasons for this as follows: Lenin worked to Stalin's advantage. Before Lenin's death he had laid the foundations for his rise to power as he was made General secretary of the Communist party in 1922 and since he was the only link between the party and government he knew the workings of both. He used his position to gain information. For example Lenin's house was bugged in order to keep Stalin supplied with data. ...read more.

This quote means that Trotsky is criticising Stalin's supporters of being willing to do anything for Stalin in their loyalty to him. Trotsky's lack of political tact and his arrogance towards the party membership left him without support within the party. Even if he did ignore the main body of the party, Trotsky still could have gained and maintained power if he skilfully forged alliances with the politburo. But his individualisation led him to trouble again because his constant bickering with Kamenev and Zinoviev, led to Kamenev publishing his own pamphlet "Lenin or Trotsky" which showed the contrast between the two. The pamphlet said that Trotsky was an ex- Menshevik who joined the Bolsheviks only when it was clear that this would be the winning side. This angered Trotsky and Stalin, Kamenev and Zinoviev all formed a triumvirate, where they all joined together to keep Trotsky from gaining power. Trotsky's only hope by this time was to release Lenin's testament, which condemned all three of the triumvirate and dismissed Stalin to such an extent that Stalin's chance of succession would have been ruined. ...read more.

Stalin was able to disgrace Trotsky in the eyes of the Russian people and would later have him exiled. Stalin now had Trotsky's opposition silenced. All he had to do now was remove his only remaining threat, which were Kamenev and Zinoviev. To do this he allied with the Bukharin over NEP. He objectives like the Pravda newspaper to misrepresent them. He sent Kirov to undermine Zinoviev's position as Leningrad party secretary. By 1927 Kamenev and Zinoviev had been weakened so much that they recanted all opposition to Stalin. Again Stalin exploited his position in the party to remove all opposition. In conclusion Trotsky ruined all of his chances to gain power whereas Stalin was skilful enough to exploit his power. The challenge never really began between him and Trotsky due to the fact that he was able to make people believe that he was Lenin' chosen successor. By the time Stalin had complete control in 1929, the Bolsheviks didn't have much in common with Lenin's ideological elite group. Stalin moulded it into a dictatorship supported by a mass bureaucracy, of which he had control. ...read more.