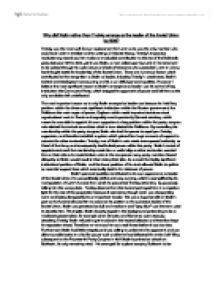 Why did Stalin rather than Trotsky emerge as the leader of the Soviet Union by 1929?

Why did Stalin rather than Trotsky emerge as the leader of the Soviet Union by 1929? Trotsky was the most well-known replacement for Lenin as he was the only member who could rival Lenin in intellect and his writings on Marxist theory. Trotsky's impressive revolutionary record saw him make an invaluable contribution to the rise of the Bolshevik party between 1917 to 1924, yet it was Stalin, a man called upon by Lenin in his testament to be sacked through his rude nature and lack of tolerance who succeeded Lenin in a long hard-fought battle for leadership of the Soviet Union. There are numerous factors which contributed to the recognition as Stalin as leader, including Trotsky's weaknesses, Stalin's tactical and ideological manoeuvring and his own skilful personal qualities. However I believe the most significant reason to Stalin's emergence as leader was his control of key institutions the Communist Party which stripped his opponents of power and left him as the only candidate left undefeated. The most important reason as to why Stalin emerged as leader was because he held key positions within the three most significant institutions within the Russian government, the Politburo the main organ of power, Orgburo which made important decisions about organizational work in Russia and arguably most importantly General secretary which meant he ...read more.

.................................... ................................Stalin's strategic schemes continued to play a dominating role and he was able to become leader of Russia due to his skill at tactical manoeuvring. For example in 1923 Stalin united forces with Zinoviev and Kamenev and formed the Triumvirate in an attempt to get rid of Trotsky, however this was their only common objective and once Trotsky had been defeated in the Thirteenth party congress in 1924, the triumvirate disintegrated Stalin moved towards the right side. Therefore Stalin strategically placed himself in different positions between the extreme left and right and adopted different polices in regards to the New Economic Policy, this capricious change meant he could change positions whenever it suited him..Stalin's commitment to the New Economic Policy depended on its success and once it began to fail Stalin broke his alliance with Bukharin in 1928 and advocated rapid industrialisation, the very policy he had previously rejected. Through tactical manoeuvring Stalin was able to remove opponents by forming alliances and using these alliances to defeat those who opposed him. Along with tactical manoeuvring Stalin changed his ideologies about the future of Russia in n attempt to gain support. Stalin advocated the patriotic ideology of Socialism in Once Country which appealed to those on the right wing and fitted with their policy of New Economic Policy, their own route to socialism hence leading to his alliance with Bukharin in 1925. ...read more.

Trotsky could also no longer handle the political attacks mounted on him by opponents and therefore was an easy target for Stalin to manipulate and overthrow in 1924 through triumvirate, the alliance Stalin made with Zinoviev and Kamenev to destroy Trotsky's reputation and ensure he would never lead the communists. Taking everything into consideration despite Stalin being referred to as "Grey Blur", his ideological battles such as his adoption of the left-wing policy when the New Economic Policy was failing and tactical manoeuvring helped to assure his victory, nevertheless Stalin's control of the party machine gave him the powerbase which Trotsky lacked. Stalin was appointed to three key institutions within the Russian government which showed how much his reputation had grown and how much trust Lenin placed in him. Trotsky did not have deceitful the character required for such a power struggle, and had many attributes which backfired against him including his original roots as a Menshevik and his position as leader of the Red Army. Ultimately it was Stalin who carried forward the concepts of Leninism by representing both rival interpretations of Leninism by moving between left and right wings. Therefore i believe it was Stalin who won the struggle for power through his own advantages. ...read more.