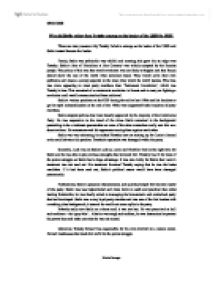 Why did Stalin rather than Trotsky emerge as the leader of the USSR in 1929?

Why did Stalin rather than Trotsky emerge as the leader of the USSR in 1929? There are many reasons why Trotsky failed to emerge as the leader of the USSR and Stalin instead became the leader. Firstly, Stalin was politically very skilful and cunning; this gave his an edge over Trotsky. Stalin's idea of 'Socialism in One Country' was widely accepted by the Russian people. The policy of this was that world revolution was not likely to happen and that Russia should show the rest of the world what socialism meant. They would solve their own problems and create a society superior to the west; they would be world leaders. This idea was more appealing to most party members than 'Permanent Revolution', which was Trotsky's idea. This consisted of a communist revolution in Russia and to carry on fighting a revolution until world communism had been achieved. ...read more.

It was also lucky for Stalin that Lenin's testament was not read out. His testament favoured Trotsky saying that he was the better candidate. If it had been read out, Stalin's political career would have been damaged permanently. Furthermore, Stalin's personal characteristics and qualities helped him become leader of the party. Stalin was less high-minded and more down to earth and practical than other leading Bolsheviks; he was ideally suited to managing the bureaucratic and centralised party that had developed. Stalin was a very loyal party member and was one of the few leaders with a working class background; it seemed he would not cause splits in the party. Nobody really saw Stalin as a threat until it was too late. He was perceived as dull and mediocre - the 'grey blur'. After he was tough and ruthless, he was determined to protect his power base and make sure that he was not ousted. ...read more.

These are qualities needed for a good leader, which Trotsky did not possess. Finally, Stalin had control over the party machine from his key positions in the Politburo, Orgburo and as General Secretary. Stalin was able to appoint his own supporters to key positions in the party. He controlled the membership of the party, using his powers to expel members most likely to support Trotsky, which decreases Trotsky's power base. He brought in new members likely to support him. This meant that Stalin was able to pass votes, as the majority of the party were his supporters. Other contenders wanted him on their side, as he could deliver votes in Congress. It is obvious why Stalin became leader of the USSR rather than Trotsky. Stalin was clearly popular with the majority of the Communist Party, as he only his supporters into the party. Through the power struggle, luck favoured Stalin. Stalin's personal qualities and political cunning meant he had the potential to be a strong leader. ?? ?? ?? ?? 09/05/2008 Nicola Savage ...read more.