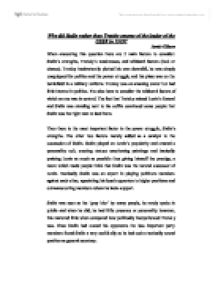 Why did Stalin rather than Trotsky emerge of the leader of the USSR in 1929?

Why did Stalin rather than Trotsky emerge of the leader of the USSR in 1929? Jamie Gibson When answering this question there are 3 main factors to consider: Stalin's strengths, Trotsky's weaknesses, and wildcard factors (luck or chance). Trotsky inadvertently plotted his own downfall, he was simply unequipped for politics and the power struggle, and his place was on the battlefield in a military uniform. Trotsky was an amazing orator but had little interest in politics. You also have to consider the wildcard factors of which no one was in control. The fact that Trotsky missed Lenin's funeral and Stalin was standing next to his coffin convinced some people that Stalin was the right man to lead them. Then there is the most important factor in the power struggle, Stalin's strengths. ...read more.

Stalin was seen as the 'grey blur' by many people, he rarely spoke in public and when he did, he had little presence or personality however, this mattered little when compared how politically inexperienced Trotsky was. Once Stalin had ousted his opponents the less important party members found Stalin a very useful ally as he had such a tactically sound position as general secretary. Stalin was however lucky that Lenin's testament was not officially released as Lenin was somewhat scathing in his attack on Stalin describing him as dangerous and promoting Trotsky as the next leader nevertheless his wish was never acted upon and not many people other then Lenin saw Stalin as a threat of even as a candidate. Trotsky did not have a power base, a vital factor for support and loyalty in the politburo. ...read more.

At the end of the day, Stalin was more than capable at taking part in political activity and dealing with the bureaucracy of party membership. Trotsky belonged on the battlefield as a commander a position that gained him respect and admiration however, he was in adept to deal with and take part in politics, like the other members he had underestimated Stalin until it was too late and Stalin had already built up a loyal power base. To some extent Trotsky brought about his own failures by underestimating Stalin, failing to build a power base and not really getting involved in politics. Trotsky also fell victim to the wildcard factor falling ill during the power struggle. It was however, Stalin's strengths and his political adeptness, which ultimately secured his position as leader of the USSR. Trotsky's weaknesses only acted as a catalyst to the succession of Stalin, a man described by Trotsky as a "grey blur". ...read more.