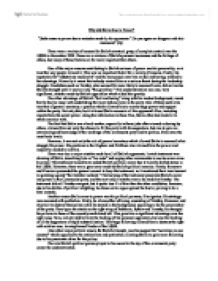 Why did Stalin Rise to Power?

Why did Stalin Rise to Power? "Stalin came to power due to mistakes made by his opponents" Do you agree or disagree with this statement? (24) There were a variety of reasons for Stalin's eventual grasp of complete control over the USSR in December 1929. These are a mixture of Stalin's personal successes and the failings of others, but many of these factors are far more important that others. One of the major reasons contributing to Stalin's seizure of power was his personality, or at least the way people viewed it. This was an important factor for a variety of reasons. Firstly, his reputation for "industrious mediocrity" and the way people saw him as dull and boring, worked to his advantage. Primarily it meant that nobody viewed him as a serious threat during the leadership struggle. Candidates such as Trotsky, who seemed far more likely to succeed Lenin, did not realise Stalin's strength until it was too late; "the grey blur." This underestimation was one, very significant, mistake made by Stalin's opposition which aided him greatly. The other advantage of Stalin's "dull and boring" along with his modest background, meant that he had no issue with undertaking the more tedious roles in the party. ...read more.

Another reason Stalin came to power was his political prowess, if not genius. His strategy was executed with perfection. Firstly, he allowed the left wing, consisting of Trotsky, Kamenev and Zinoviev to destroy themselves while he stayed in the background, appearing to be the peacemaker of the party. Then upon his attack on the right wing of Bukharin, Rykov and Tomsky, he changed his policies to those of the recently annihilated left. This gave him a significant advantage over the right wing. Now, not only did he have the backing of his personal supporters, but also the backing of all the supporters of rapid industrialisation. This huge following allowed him to destroy the right with relative ease, leaving himself leader of the USSR. One other major political reason for Stalin's triumph, was his support for "socialism in one country" which appealed to the nationalism and patriotism, allowing Stalin to gain more following due to his passionate drive for the policy. The role Stalin's political genius played in his ascent to the top of the communist party cannot be underestimated. Another main reason Stalin came to power was not due to mistakes by his opponents, but was simply luck. ...read more.

This apparent lack of loyalty was a mistake on Trotsky's behalf which would work against him during the power struggle. To conclude, I feel that mistakes made by Stalin's opposition, such as their underestimation of him, their failure to see him as a threat, Trotsky's foolishness and apparent lack of loyalty and most significantly their burial of the testament, were of major help to Stalin in his struggle for power, however, I feel they weren't the most important, I feel the most important factors were those of Stalin's personality, cunning, luck, previous offices and enormous political skill; without these, he would have been far from able to seize control of the USSR. I believe that although the mistakes of other party members aided Stalin, he was a strong enough candidate to take power without all but the burial of the testament, which I feel can also be attributed to luck, as he was fortunate that Lenin had criticised Zinoviev and Kamenev as well as himself. To attribute many of Trotsky's disadvantages to mistakes would be extremely harsh, as many of his failings were down to his personality, or the office he had been assigned, something out of his power completely. ...read more.