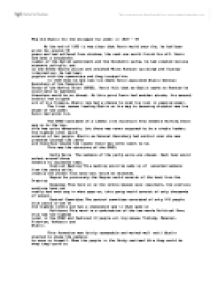 Why did Stalin win the struggle for power in 1923 - 9? At the end of 1923 it was clear that Lenin would soon die, he had been alive for around 50 years and had suffered from strokes, the next one would finish him off. Lenin had been a successful leader of the Soviet government and the Bolshevik party, he had created various economic policy's, set up the Cheka secret police and resisted White Russian uprisings and foreign intervention. He had been popular with the communists and they trusted him. In 1922 when he was near his death Lenin appointed Stalin General Secretary of the Communist Party of the Soviet Union (CPSU). Lenin felt that as Stalin spoke no Russian he could make no speeches therefore would be no threat. At this point Lenin had another stroke, his second, control now slipped out of his fingers, Stalin now had a chance to push his luck in ceasing power. The first reason leading Stalin on his way to becoming dictator was his abuse of the power Lenin had given him. The CPSU consisted of a ladder like structure with members working there way up to the top, this was quite democratic, but there was never supposed to be a single leader, the highest level would consist of ten people. ...read more.

if you increase capital goods you are not producing any consumer goods, so the money that workers are earning is of no use to them. This is an example: A worker works hard in a factory producing wood, so that the country has a good supply. When he gets paid he wants to buy a new table, but all there is in his country is wood. Stalin comes up with criticisms for both Trotsky's ideas, he says that we should stick with LENIN'S New Economic Policy because he made it therefore it must be right. He also said that we should leave the world alone because that is what LENIN wanted therefore it must be right. Stalin new too well that Lenin was the Communists idol, and that by saying that his way was Lenin's way, would attract the attention he needed. Trotsky then by chance fell ill with Malaria just when Lenin was dying, this is when he would need all his energy to defeat Stalin so this was not good. Stalin also played tricks on Trotsky including the time that Stalin told Trotsky the wrong date for Lenin's funeral. Stalin was there, Trotsky wasn't, who looked like a true friend and supporter? As if all this was not bad enough, in January 1925, after 7 years Trotsky gave up the army, this was his finish. ...read more.

This is the main way all the stages of succeeding combine, Overall I think that Stalin's struggle for power was one big popularity contest. Through popularity, most possible problems that he could/did come across were solved. Firstly he organised the CPSU in such a way that not only were they all supporters of him, but they were continuously trying their hardest to prove themselves and move up the ranks. In any election they would vote, if not only to go up a rank. Next, he took turns befriending each of the opposition when he needed to, so he was in control. Only he saw the big picture, he could even set them off at each other if he wanted. As a result of this Zinoviev saved him, then he took Bukharin's side in the debate on the NEP in order to help get rid of Trotsky, then he opposed Bukharin using the same arguments Trotsky had used. Lenin had helped him gain his position aswell, by becoming ill at the worst time, because Stalin convinced the public that he was his best friend and would follow in his successful footsteps. There was just as much Lenin could do about it when he was alive as dead because he could barely talk or move. It was a fairly smooth journey for Stalin, he had a few hiccups, but knew exactly how to solve them. The reason that Stalin won the struggle for power was his manipulation of people in a way that they supported him. ...read more.