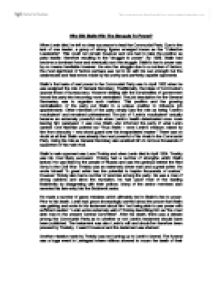 Why did Stalin win the struggle to power?

Why Did Stalin Win The Struggle To Power? When Lenin died, he left no clear successor to lead the Communist Party. Due to the lack of one leader, a group of strong figures emerged known as the "Collective Leadership". This could not remain however and one had to take the position as party leader, therefore resulting in the "struggle to power". By 1929, Stalin had become a dominant force and eventually won the struggle. Stalin's rise to power was by no means inevitable however. He won the struggle due to a number of factors; the most significant of factors perhaps was not to do with his own strength but the weaknesses and fatal errors made by his worthy and perfectly capable opponents. Stalin's first taste of real power in the Communist Party was in April 1922 when he was assigned the role of General Secretary. Traditionally, the ideas of Communism oppose those of bureaucracy. However dealing with the complexities of government forced the party into becoming more centralised. The job description for the General Secreatary was to organise such matters. This position and the growing centralisation of the party put Stalin in a unique position to influence job appointments. ...read more.

The publication of a letter Trotsky wrote to his friend in 1913 was also a major set back. The letter spoke badly of Lenin as at the time the letter was written, Trotsky and Lenin were in opposing parties. The publication of the letter was published straight after Lenin's death and therefore led readers of the "Pravda" to believe that Trotsky was attacking Lenin when the country were mourning their beloved leader. Trotsky considered Stalin to be a man of only "moderate talents" and it was because of this that he didn't take Stalin's attempts to obtain power seriously. If Trotsky had taken his knowledge of Lenin's views on Stalin to the Central Committee, Stalin would've probably been removed from power. However Trotsky didn't just remain silent on the matter, he also persuaded his supporters to keep Stalin as General Secretary. It was not just Trotsky of the Communist Party that made fatal errors. Kameniev and Zinoviev, two key members were also blind to the forthcoming attack of Stalin. Along with Trotsky, Zinoviev and Kameniev failed to fight for the publication of Lenin's testament: a vital factor in showing the weaknesses of Stalin as a leader. ...read more.

I believe that the centralised nature of the Communist party that begun under Lenin made it much more easy to control. The combination of new Communist members being poorly educated and easy to control and Stalin's skills of manipulation meant his support base was ever growing, unlike his rivals'. I also think that Stalin's political skills aided his arise but by no means secured his position as leader. In my opinion, it was Trotsky's downfalls that secured Stalin's position of power. Too many fatal mistakes were made by his rivals which seemed to happen at perfect timing. Trotsky was constantly undermining Stalin's attempts to obtain power and never took him seriously. Because of this, he didn't appear to work hard enough in blocking Stalin's attempts or building a loyal support base. Lenin described him as being over confidant, similarly to a number of historians who pointed out that Trotsky simply assumed he would automatically be Lenin's successor. One claimed "Trotsky considered it beneath his dignity to engage actively in a struggle to power." It appears that Trotsky's self assured nature had blinded him to Stalin's consistent plans. This is why I believe that if Trotsky and Stalin's other main rivals had been a little more aware, Stalin would've by no means been able to take position as dictator of Russia. ...read more.