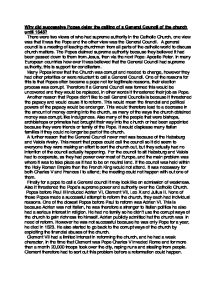 Why did successive Popes delay the calling of a General Council of the church until 1545?

Why did successive Popes delay the calling of a General Council of the church until 1545? There were two views of who had supreme authority in the Catholic Church, one view was that it was the Pope and the other view was the General Council. A general council is a meeting of leading churchmen from all parts of the catholic world to discuss church matters. The Popes claimed supreme authority because they believed it had been passed down to them from Jesus, then via the next Pope: Apostle Peter. In many European countries how ever it was believed that the General Council had supreme authority, this is support for conciliarism. Many Popes knew that the Church was corrupt and needed to change, however they had other priorities or were reluctant to call a General Council. One of the reasons for this is that Popes often became a pope not for legitimate reasons, their election process was corrupt. Therefore if a General Council was formed this would be uncovered and they would be replaced, in other words it threatened their job as Pope. Another reason that Popes didn't like to call General Councils is because it threatened the papacy and would cause it to reform. ...read more.

Clement was the last Pope before Paul and the idea of the Sack of Rome became known to many people. This was the idea that God was not happy with the church and the way it was run, this therefore put urgency on reforming the church. This put more pressure on Paul to do something. When Paul first became Pope it did not look likely that he would be a Pope that would reform the Catholic Church. This was because eh was from a typical Italian family who saw the church as a source of power and wealth and not for religion. Paul did typically as other Popes did when he first became a Pope; he made his two fifteen year old grandsons cardinals. He also made his son the ruler of the duchy of Parma and Piacenza, therefore making in family property and not the papacy's. Paul become Pope at 66 and was therefore not expected to be Pope for long. Paul showed no interest in religion early on in life, however after a spiritual awakening later in life he was ordained priest, but he still was interested in worldly things. ...read more.

However the place could not be to far from the Pope otherwise there would be security risks and communication problems. A city was therefore needed that was technically in the empire but was sufficiently independent to be acceptable to Charles and Frances as an acceptable state. Trent was therefore decided as it was an independent bishopric. The war is Europe also caused a major problem, the council was originally scheduled to meet in 1542 but in couldn't due to the war. The war was Charles against Frances; therefore neither of these two most important people would attend. Charles was also busy fighting the German Lutherans. A peace treaty was signed in 1544 between the two rivals and the Lutheran league began to fall. Also Paul didn't want the council to weaken the papacy, he therefore says before the meeting that anything that is said is just a proposal and will not necessarily be put into action. Paul also wanted to adjust the Voting by Nations method as he thought it unfair as people could influence or change others ideas. So Paul had to take time to change it to one man has one vote and no one could change it. Due to all these reasons the Council of Trent took a long time to actually be called and sat. ...read more.