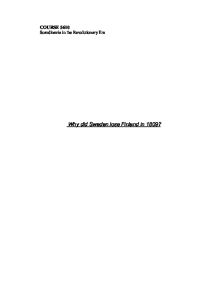 Why did Sweden lose Finlandin 1809?

COURSE 5610 Scandinavia in the Revolutionary Era Why did Sweden lose Finland in 1809? After centuries of war on their frontier it was natural for either of the two countries, Russia or Finland, to take opportunity to strike at the other. Gustaf III had done so in 1789 and now favourable circumstances were on Russia's side. Also, there came repeated reminders from Napoleon of the commitments of the Tilsit pact. Accordingly, at the beginning of 1808 the Russian attack on Sweden began by having invaded Finland on February 21, using as justification Gustaf IV Adolf's stubborn adherence to his British alliance. However, Alexander's desire was to avoid war as long as possible, which was borne out by the fact that delivery of the already prepared declaration of war was postponed for a month. ...read more.

In this national emergency Gustaf 's leadership proved no more effective than in the Pomeranian campaign earlier on. He decided that the western front was the more important and, against the advice of his ministers, who feared to weaken the defences of Finland, he determined to concentrate his forces to withstand the expected Danish and French attacks form south and west. After all, these were directed against Sweden proper. However, the threat from that side failed to develop. Though, Gustaf was not completely friendless. England was Sweden's only ally, who also promised a monthly subsidy of �100,000, and an expeditionary force under the command of Sir John Moore was sent to Gothenburg in May,1808. No previous agreement, however, had been reached as regards the Swedish military manoeuvres and the expedition soon sailed away again with nothing accomplished or even attempted. ...read more.

Many of the officers felt that defeat was inevitable and that Sweden's only hope of salvation would be in close co-operation with France. It was said to be this mood that brought about the disaster that befell the Swedish troops before their king arrived. Also, equally undermining was the fact that whereas the Russian officers, fresh from campaigning in Sentral Europe, had a more modern conception of warfare, the higher offices in command of Finnish units had been trained along old-fashioned lines and they lacked vigour. The fortress of Sveaborg, the so called the 'Gibraltar of the North', was to play a major role in any counter-offensive. Its importance was also increased by the presence there of the whole Archipelago Fleet, and its garrison of 7,000 men was well supplied with food and ammunition. The fortress was under the command of Karl Otto Cronstedt, the admiral who underestimated the strength of his position and was said to be rather pessimistic about ...read more.