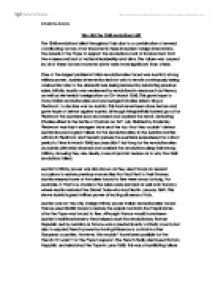 Why did the 1848 revolutions in italy fail?

Why did the 1848 revolutions fail? The 1848 revolutions failed throughout Italy due to a combination of several contributing factors, most importantly these included; foreign intervention, the refusal of the Pope to support the revolutions, lack of involvement from the masses and lack of national leadership and aims. The failure was caused by all of these factors; however, some were more significant than others. One of the largest problems Italian revolutionaries faced was Austria's strong military power. Austrian intervention led not only to revolts continuously being crushed but also to the absolutist rule being restored by reinstating previous rulers. Initially, Austria was weakened by revolutions in areas such as Vienna, as well as Metternich's resignation on 13th March 1848. This gave hope to many Italian revolutionaries and encouraged Charles Albert, king of Piedmont, to declare war on Austria. This had never been done before and gave hope of defeat against Austria. Although things initially looked good for Piedmont the Austrians soon recovered and crushed the revolt, defeating Charles Albert in the battle of Custoza on 24th July 1848 led by Radetzky. Piedmont was Italy's strongest state and the fact that they couldn't defeat Austria showed a great failure for the revolutionaries. In the Austrian battles with both Piedmont and Venetia (where the Austrians surrendered for a short period of time in March 1848) ...read more.

However, in his allocution issued 29th April 1848 the Pope announced that the war against Austria did not have his blessing and the papacy did not support the idea of a united Italy. Therefore the allocution became significant as it removed any chance of the Pope offering leadership or even support to a unified Italy. This is what caused the Pope to appeal to France to crush the revolts in the Papal States, which further shows the Popes anti-nationalist views, becoming crucial to the failure of the revolutions as nationalists now had no leader and no allies against Austria. With no real leadership to follow it was almost impossible for the nationalists to give a united front and defeat the Austrians, leading to failure of the revolutions. Of the three possible leaders for the revolutions; Pope Pius IX, Mazzini and Charles Albert, none was universally acceptable. Charles Albert was defeated twice by Austrian troops and therefore became a very weak potential leader. By issuing his allocution the Pope subsequently separated himself entirely from the nationalist movement, eliminating himself from being a possible ruler. Mazzini acted as leader of the Roman Republic for 100 days after the Pope fled and urged states to work together to end Austrian rule until he was crushed by the French troops which the Pope demanded. ...read more.

In conclusion, there were five main factors which caused the failure of the revolutions in 1848; Austrian and French intervention, the pope's refusal to support the revolutions, lack of national leadership and aims and lack on involvement from the masses. However, in my opinion the most significant factor was Austria's intervention in the revolutions - without their interference it is a great deal more likely that Italy would have succeeded in the revolutions and become a unified country. Although other factors such as lack of leadership were important, in comparison with Italy facing Austria it is less significant because even if the nationalists had been able to present a united front, such as in Sicily, it is likely that Austria's military power would have been able to crush it. Austria's military supremacy was a very important factor in the failure of the revolutions as they were superior in numbers, better equipped and a better led army than Italy who lacked in resources, particularly military ones. In order to successfully fight Austria the revolutionaries needed allies but without the pope and therefore catholic powers such as France, who would initially have been Austria's traditional enemy, they stood little chance of this. Therefore I believe the Pope was also a very significant reason why the revolutions failed as he could have provided the leader to stand up against Austria's foreign interference, as well as organising and give aims to the revolutionaries. ?? ?? ?? ?? Charlotte Adams ...read more.