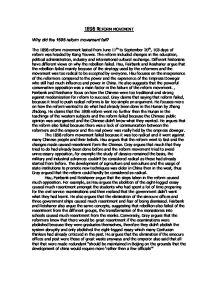 Why did the 1898 reform movement fail?

1898 REFORM MOVEMENT Why did the 1898 reform movement fail? The 1898 reform movement lasted from June 11th to September 20th, 103 days of reform was headed by Kang Youwei. The reform included changes in the education, political administration, industry and international cultural exchange. Different historians have different views on why the rebellion failed. Hsu, Fairbank and Reishaner argue that the rebellion failed mainly because of the strategy used by the reformers and the movement was too radical to be accepted by everyone. Hsu focuses on the inexperience of the reformers compared to the power and the experience of the Empress Dowager who still had much influence and power in China. He also suggests that the powerful conservative opposition was a main factor in the failure of the reform movement. , Fairbank and Reishaner focus on how the Chinese were too traditional and strong against modernization for reform to succeed. Gray claims that saying that reform failed, because it tried to push radical reforms is far too simple an argument. He focuses more on how the reform wanted to do what had already been done in the Hunan by Zhang Zhidong. ...read more.

Hsu, Fairbank and Reishaner argue that the steps taken in the reform caused much opposition. For example, as Hsu argues the abolition of the eight-legged essay caused much resentment amongst the students who had spent a lot of time preparing for the civil service examinations and then realized that the government didn't want what they had learnt. He also argues that the elimination of the sinecure offices and three government ships caused much resentment and fear of being dismissed. Fairbank and Reishaner also argue the same concepts, suggesting that rebellion also failed of the resentment from the different groups, the transformation of the monasteries into schools caused much resentment from the monks. Conversely, Gray argues that the reformers knew that there would be great resentment if the examinations were abolished because they were graduates themselves, therefore they didn't abolish the system abruptly and only abolished the eight-legged essay which many Confucian thinkers had already criticized in the past. He argues that the elimination if the sinecure offices and post were those of great waste anyways and the emperor also said that all that that were made redundant "should be maintained in Beijing on the grounds that the development of china ...read more.

Since 1961, the empress dowager had the ultimate power; she was very experienced compared to the inexperienced reformers. She was in control of the political and military affairs and the army was ready to defend her interests. The emperor and the reformers turned to Yuan Shih Kai for support but he chose to support the dowager and that was the collapse of the reform. Gray also argues that the empress dowager had the real power and the emperor's rejections of Rong Lu's recommendations were the real reason for the failure of the hundred day crisis. The 1898 reform movement failed for many different reasons. Different historians have different views on why the reform failed. Hsu, Reischauer and Fairbank view the reform as a radical movement that was not accepted by everyone. Hsu says that the empress dowager held power and was too experienced compared to the inexperienced reformers. Contrastingly Gray argues that reform was not radical and there was no real evidence of opposition against it. He argues that the reform failed because communication between the emperor and the reformers was opposed and the empress dowager held the real power. ...read more.