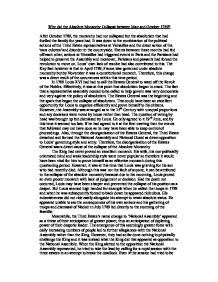 Why did the Absolute Monarchy Collapse between May and October 1789?

Why did the Absolute Monarchy Collapse between May and October 1789? After October 1789, the monarchy had not collapsed but the absolutism that had fuelled the family for years had. It was down to the combination of the political actions of the Third Estate representatives at Versailles and the direct action of the 'sans culottes' and disorder in the countryside. Events between these months had fed off each other; actions at Versailles had triggered events in Paris and the Parisians had helped to preserve the Assembly and moreover, Parisians and peasants had forced the revolution to move on. Louis' own lack of resolve had also contributed to this. The Key fact however is that in April 1789, France was governed under absolute monarchy but by November it was a constitutional monarch. Therefore, this change was a direct result of the occurrences within this time period. In 1788 Louis XVI had had to call the Estates General to ward off the Revolt of the Nobles. Effectively, it was at this point that absolutism began to crack. The fact that a representative assembly needed to be called to help govern was very democratic and very against the policy of absolutism. The Estates General was the beginning and the spark that began the collapse of absolutism. This could have been an excellent opportunity for Louis to organise efficiently and prove himself to his citizens. However, the Assembly was arranged as in the 15th Century with unequal proportions and any decisions were voted by house rather than head. ...read more.

The reforms put forward may have at one time won over members of the Third Estate but now they didn't want to know, especially as other key issues were not changed such as the third estate's recent name change and the decision to retain many privileges for some. Following this was a movement of members of other estates to join the now illegally named National Assembly. It appeared that the king had failed. Demonstrations in Paris supported the new assembly and plots were begun to destroy the apparently threatening National Assembly. It was even rumoured that Paris was to be starved of grain to prevent them assisting the National Assembly. All of this confusion and deserters reflected a lack of control of the king and also a lack of trust that his citizens had for him which was another step to the complete break down of the absolute monarchy as within an ideal absolute monarchy, there would be no questioning the king's power, especially not mass numbers deserting him. He would have no need to starve citizens of his capital city in order that they cooperated. The next event causing absolutism collapse was that of the dismissal of Necker. Necker was associated with revolution and his dismissal seemed to represent to the citizens that Louis was cracking down on change. There was a panic that he was going to dissolve the assembly so the poorer citizens of Paris began to arm themselves and the troops that Louis had called did nothing but watch the mounting disorder. ...read more.

It was in the salons of Paris that much of the questioning and arguing took place. The influence of the enlightenment then started to extend to the educated bourgeoisie. Even the artisans and workers, particularly in Paris were encouraged to question authority by the many pamphlets and cartoons satirising in particular the monarchy, contributing to a lack of respect. Due to this it became fashionable to be sceptical and questioning of government and the Enlightenment undermined the divine right on which his system of government was based therefore fundamentally increasing the number of people who would support a collapse of absolutism if offered due to the theoretical reasoning. 1789 had been an eventful year. At the beginning of it, in January, Abbe Seiye wrote a pamphlet entitled 'what is the third estate'. In it he detailed how important the third estate were and how little they counted for. He concluded with saying that the third estate needed to obtain a constitution, an end to the inequality of the ancien regime and should take control of affairs itself. They had now done that and the only way they could have done that or reached a position where it was felt they had power was by reducing the absolute power that the King had had. This had been done; the king was powerless, vetoes and slight privileges aside. So in short, the absolute monarchy in France crumbled before being completely dead between May and October 1789 because the third estate had followed the Abbe Seiye's advice and claimed power for themselves and had done this by uniting and slowly claiming the power the king was losing. ...read more.