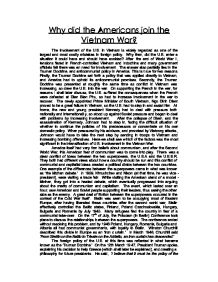 Why did the Americans join the Vietnam War?

Why did the Americans join the Vietnam War? The involvement of the U.S. in Vietnam is widely regarded as one of the largest and most costly mistakes in foreign policy. Why then, did the U.S. enter a situation it could have and should have avoided? After the end of World War II, tensions flared in French-controlled Vietnam and Indochina and many government officials felt there was an need for involvement. The answer also partially lies in the Truman Doctrine, and anticommunist policy in America. This is true for two reasons. Firstly, the Truman Doctrine set forth a policy that was applied directly to Vietnam, and America had to uphold its anticommunist promises. Secondly, the Truman Doctrine was presented at roughly the same time as conflict in Vietnam was increasing, so drew the U.S. into the war. On supporting the French in the war, for reasons I shall later discuss, the U.S. suffered the consequences when the French were defeated at Dien Bien Phu, so had to increase involvement in the war to recover. The newly appointed Prime Minister of South Vietnam, Ngo Dinh Diem proved to be a great failure in Vietnam, so the U.S. had to step in and assist him. At home, the new and young president Kennedy had to deal with pressure both nationally and internationally, so stood up against Soviet pressure and began to deal with problems by increasing involvement. After the collapse of Diem, and the assassination of Kennedy, Johnson had to step in, facing the difficult situation of whether to continue the policies of his predecessors or concentrate on his own domestic policy. When pressured by his advisors, and provoked by Vietcong attacks, Johnson would have to take the next step by sending in troops to Vietnam and increasing bombing offensives. Here we shall see which of the factors was the most significant in the intensification of U.S. ...read more.

It was to be Diem, and his lack of support that would lead to involvement increasing further for the U.S. The nepotistic way in which he chose his family members to occupy positions of power was greatly resented by the public, as was choice of government members being catholic-orientated. Dealing with land reform was seen as being a good way to gain more public support, so as to make the people see Diem as being fair. However, he slowed the process of redistribution of land, so that he could keep the support of the larger landowners, so the mass of the population did not receive any benefit from Diem's reforms. Diem himself, being a catholic, was very unsympathetic to the diversity of religions in Vietnam, and saw them as obstacles to his creating a unified government. Through his corrupt methods of bribery and force through the army, he attempted to deal with religious sects in Vietnam, but many continued to fight against him in smaller numbers, or join the communists. It was clear the Diem's methods were not benefiting South Vietnam at all. Ngo Dinh Nhu, Diem's brother, led a brutal suppression of the Buddhist resistance. Predictably, his anticommunist campaigns were unpopular as well. In the summer of 1955, Diem launched what was known as the 'Denunciation of the Communists' campaign. 8000-10000 members of the Vietcong still remained in South Vietnam, so those who had opposed the French, or those who had been in any way disloyal to the government were suspected of being communists. Thousands of these suspects were killed, and a number around 50,000 were sent to labour camps. This campaign caused widespread terror in Vietnam, and many more hated Diem because of it. In 1957, enough anger against the Diem regime had built up in South Vietnam for the South Vietnamese communists to come out of hiding, and begin a campaign of counter terror against Diem. ...read more.

and the Soviet Union. U.S involvement in the war was due to many different factors all mounting up to lead Johnson to take major steps towards involvement in the war. However, I feel that the anticommunist beliefs of the U.S., in combination with the Truman Doctrine, played the most important part in convincing the U.S. that happenings in Southeast Asia were their business. Rooting back to the Cold War, the rivalry between the superpowers, the U.S.A and the U.S.S.R made the Soviet spread of communism even more significant. The Truman Doctrine provided a foundation for the policies of future presidents, and belief in the doctrine was a way of gaining the support of the public at home. The fall of the French was also important, as the defeat led to the U.S. having to get more directly involved with the governmental affairs of South Vietnam, and in particular, instructing Diem to carry out their will. The failure and downfall of Ngo Dinh Diem, though in my opinion less significant, also played a part in the increase in U.S. involvement in the war, as his character, policies and beliefs lost a great deal of support from the Vietnamese public. The disposal of Diem created further problems, with the lack of stable government. The assassination of Kennedy left it upon Johnson to take action, and that he did, with the approval of the government after the Gulf of Tonkin resolution was passed. The U.S. would have to get more involved to battle against this, and win 'the hearts and minds of the people.' Kennedy's personal domestic policy of impressing the world with his foreign policy techniques was less influential on the general increment in U.S. involvement in the war, as it only lasted 2 years, and all that happened in this period was an increase of military advisors. However, this did lead the way for Johnson to increase involvement with the more extreme measures of 'Operation Rolling Thunder' and the sending in of troops. ...read more.