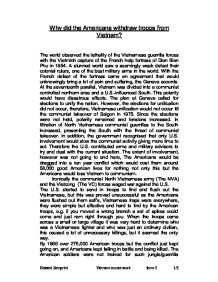 Why did the Americans withdraw troops from Vietnam?

Why did the Americans withdraw troops from Vietnam? The world observed the lethality of the Vietnamese guerrilla forces with the Vietminh capture of the French help fortress of Dien Bien Phu in 1954. A stunned world saw a seemingly weak defeat their colonial rulers, one of the best military arms in the world. With the French defeat of the fortress came an agreement that would unknowingly bring a lot of pain and suffering, the Geneva accords. At the seventeenth parallel, Vietnam was divided into a communist controlled northern area and a U.S.-influenced South. This polarity would have disastrous effects. The plan at Geneva called for elections to unify the nation. However, the elections for unification did not occur, therefore, Vietnamese unification would not occur till the communist takeover of Saigon in 1975. Since the elections were not held, polarity remained and tensions increased. In filtration of North Vietnamese communist guerrillas to the South increased, presenting the South with the threat of communist takeover. ...read more.

Soon the number of American troops sent into Vietnam was to rise over half a million. Over back in the U.S. American civilians were protesting against the war, and a lot of violence, injuries, imprisonments and even death were occurring. As so many troops kept being sent in to war and barely a quarter of the ones sent in returning the American civilians saw this as a complete death trap. One of the most significant mistakes made by the U.S. leadership during the conflict was the decision to wage limited war, or a low-intensity conflict. Such a strategy is characterized by limited action against the enemy as opposed to full, intense fighting. Obviously, limited war has the potential to prolong a conflict and create war of attrition. But the Americans did not use there full potential if they used a lot more air raids and more heavy artillery such as tanks and Shell guns, then they might have had a better chance of defeating the Vietnamese and the communists, but instead they just used light artillery and troops after troops. ...read more.

decisively cripple the north through total war, and the Americans would have stopped the capture of Vietnam by communism and restore the peace. So in a view American soldiers continued to die for a war that did not go anywhere. Soon the Americans were running out of troops and light artillery and were being complete pushed further and further back, soon the Americans had to leave, and Vietnam had fallen to communism. So in conclusion there are many different reasons why the Americans had to withdraw there troops, not that they had many left by the end, for example the skill of the Vietnamese guerrilla soldiers had the major advantage of knowing the way around the jungles and how to hide them self's in civilian grounds, troops were not getting the air support or artillery support they needed and so were losing vital places in the war, protesting back in the U.S. lowered moral though the U.S. soldiers, there for not giving the support they needed and also making it not possible for total war to achieved, so in the end there were many mistakes made that could have been resolved or avoided. Edward Semprini Vietnam course work form 5 1/3 ...read more.