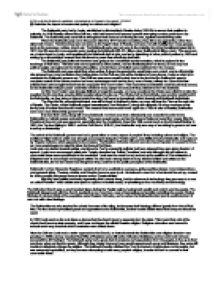 Why did the Bolshevik establish a dictatorship in Russia in the period 1918-24? - Describe the impact of communist policy on culture and religion?

(i) Why did the Bolshevik establish a dictatorship in Russia in the period 1918-24? (ii) Describe the impact of communist policy on culture and religion? The Bolshevik party, led by Lenin, established a dictatorship in Russia during 1918-24 to secure their position in authority. In 1918 Russia entered into Civil war, with both internal and external powers attempting to seize power from the Bolshevik. The Bolshevik party used this to strengthen their chances of winning the war, against overwhelming odds. When the Bolshevik party came into power after the 1917 October revolution, they did so by aggressive, rather than diplomatic means. Therefore they were not seen as the 'legal' rulers of Russia, and were met with hostility from many groups, such as the autocracy, nobles, church etc. The Bolshevik party was not even in the majority, for at the Constituent Assembly in 1917, the SR were the more popular party, beating the Bolshevik (SR-21 million votes, Bolshevik-9million votes). This was seen as a major threat by Lenin, as it questioned the Bolshevik right to rule, and so by dissolving all other political parties by 1923 and setting up a dictatorship it ensured that this threat to power was effectively dealt with. ...read more.

The Cheka, under Bolshevik orders assassinated Tsar Nicholas 2, along with allegedly 10 other members of his family (only 9 bodies were found in total). This ensured that there would never again be a Tsar as ruler of Russia; Bolsheviks were now a true dictatorship government. It is clear that Lenin, along with many Bolshevik members saw that a dictatorship was essential in order for the Bolsheviks to maintain power and authority. They were a weak party, and so the threat of being removed from power, like the Provisional Government was apparent, especially after the Constituent Assembly. With events such as the Kronstadt Mutiny in 1921, the Tambov Rising in 1920-1 and the Civil War in 1918-21, the Bolsheviks only sure way of remaining in government was to set up a dictatorship. The arrival of the Bolshevik government had a great effect on every aspect of people's lives; including culture and religion. The traditional 'High Culture', which was strongly encouraged during the Tsarist regime, was disliked by the Bolsheviks and replaced by 'Popular Culture', which appealed to the masses. ...read more.

For the church symbolised greed and oppression to the Bolsheviks, but their soviet beliefs stated that everyone should be equal. In 1918 Lenin went so far as to issue a decree that the church became separate from the state. This meant that a lot of the church land became state property, and it was not longer the official Russian religion. Religious education was banned in schools and many churches and monasteries were closed down. After the Civil war Lenin took a softer approach to the Church, as hatred towards the Bolsheviks over religious freedom was growing. In 1920 a survey revealed that 55% of Russians were still active Orthodox Christians, and so Lenin had not been successful in eliminating it. The Bolshevik party had a great deal of pressure and expectations from the people, to live up to their promises, when coming into power. Although they clearly improved many social aspects such as art and literature, they were still unable to affectively change the religion. The Bolshevik heavily criticised the Tsar for the lack of rights given to the people, but was extremely hypocritical, as they too were attempting to take away people's religion, in order for them to convert to their communist views. ...read more.