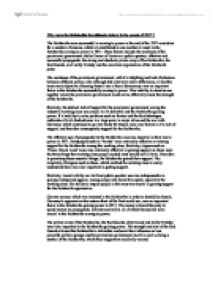 Why did the Bolshevik Revolution of November 1917 succeed

Why were the Bolsheviks the ultimate victors in the events of 1917 ? The Bolsheviks were successful in coming to power in the end of the 1917 revolution for a number of reasons, which all contributed to one another to result in the Bolsheviks coming to power in 1917. These factors include the weakness of the provisional government, the brilliance of Lenin as a public speaker, effective and successful propaganda, the strong and obedient private army of the Bolsheviks, the Red Guards, well led by Trotsky and the excellent organisation of the Bolshevik party. The weakness of the provisional government, with it's infighting and lack of cohesion between different parties, who although had relatively minor differences, all had the same main objective of turning Russia into a liberal democracy, was an important factor in the Bolsheviks successfully coming to power. ...read more.

Similarly, slogans such as 'Peace, Bread, Land' were also extremely effective in gaining support as, these were the three things that working class people needed most yet did not all have. Therefore in promising these essential things, the Bolsheviks gained their support. The simplicity of slogans such as these, which enabled the working class to easily understand them was also important in getting support. Similarly, Lenin's ability as a brilliant public speaker was also indispensable in gaining widespread support, among people who heard him speak, especially the working class. His ability to inspire people in this way was crucial in gaining support for the Bolshevik organisation. German money, which was invested in the Bolsheviks in order to destabilise Russia, Germany's opponent on the eastern front of the first world war, was an important factor in the Bolsheviks gaining power in 1917. ...read more.

Membership grew to 2 million in 3 months. Unlike the Provisional Government, the Bolsheviks demanded total obedience from their members, so they were well-disciplined (members did what the leaders wanted). This allowed the Bolsheviks to co-ordinate their members into effective protests and opposition to the provisional government. The fact that the Bolsheviks had the widespread support of people in industrial cities and cities including the two major centres, Petrograd and Moscow, meant that they had a lot of influence in the major seats of power, which was crucial in them coming to power, as they would ultimately not have been able to assume and maintain command had they not had this strong backing from the proletariat workers. In conclusion, all of the above factors contributed to the Bolsheviks coming to power in 1917, and subsequently allowed them to govern effectively, mainly with the support of the people of the working class in the large cities and towns. ...read more.