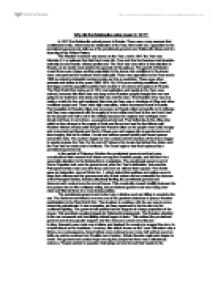 Why did the Bolsheviks seize power in 1917?

Why did the Bolsheviks seize power in 1917? In 1917 the Bolsheviks seized power in Russia. There were many reasons that contributed to this, which include: abdication of the Tsar, first world war, opposition to the provisional government, failures of the provisional government, Bolsheviks ideas and the storming of the Winter Palace. The Russian monarch was known as the Tsar, and in 1917 the Tsar was Nicholas II. He believed that God had made him Tsar and that he therefore had absolute authority to rule Russia, without parliament. The Tsar was very na�ve to the situation in Russia, as he rarely went outside the grounds of his palaces. The growth of industry meant there was a large working population in the towns, but conditions in the towns were cramped and the workers were badly paid. There was opposition to the Tsar and in 1905 a protest by industrial workers broke out into a revolution. There were other protests and strikes in the years 1905-1914. By 1914 poor working conditions, food shortages and the opposition parties had created a very tense atmosphere in Russia. The First World War broke out in 1914 and patriotism and loyalty to the Tsar were revived, however this didn't last very long as the Russian people thought the war was going to be victorious and short, but this was not the case. ...read more.

The provisional government made many mistakes such as failing to conclude the war. The Government failed to remove one of the greatest obstacles to peace: Russian participation in the First World War. The decision to continue with the war was to prove extremely unfortunate. It was unpopular, as there appeared to be few aims to the continued fighting. The government quickly lost the support of a large proportion of the troops. This provided excellent targets for Bolshevik propaganda. The Russian situation in the war worsened and humiliating defeat began to loom. This robbed the provisional government of any popular support, and the chance to crush army dissent. In May, Kerensky was made war minister and inspired the country to support the Army in a fresh attack on the Austrians. However, this attack known as the 'June Offensive' was a failure, as a consequence, bread rations were reduced even more; rail workers went on strike as well as workers from Puetilov arms factory. Whole Russian regiments began to revolt. The government created hope among the people but there was a disastrous outcome. People started to question their judgment and turned their heads to the Bolsheviks. In the atmosphere created by the news of the failure of the offensive and the government's mounting problems, the protests of early July turned into a direct challenge to the provisional government. ...read more.

By June the Bolsheviks slogan "All power to the soviets" was eagerly taken up by tens of thousands of demonstrating workers. The Bolsheviks controlled the soviets and its military. This united leadership made the Bolsheviks stronger and more of a threat to the government. It was not that Lenin supported the soviets in their present arrangement, and he did loathe much of what they had done, but the soviets were a power base. They had become an essential part of the government. Lenin thought that the soviets offered his small Bolshevik Party the means by which they could obtain power. Support for the peasants and workers' soviets grew rapidly through 1917, especially after the defeat of Kornilov. In October Lenin persuaded the Petrograd soviet to take the decision to overthrow Kerensky's government. In October 1917, the Bolsheviks staged their revolution efficiently and quickly under the organisation of Trotsky. Within two days Trotsky's Red Guards had seized railway stations, telegraph offices and other target such as the Winter Palace. They captured the government buildings and the Winter Palace in Petrograd on 25th to 26th October 1917, and the provisional government was arrested. This was done with relative ease, as the Bolsheviks were able to do this over a short time period and there was no resistance created by the provisional government. Only five people were killed during these events, mostly shot by stray bullets. Mobs only entered, looted and vandalized the Winter palace after it ceased to defend itself. ...read more.