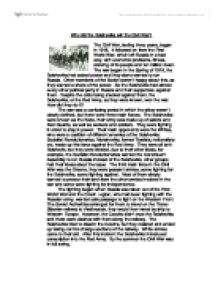 Why did the Bolsheviks win the Civil War?

Why did the Bolsheviks win the Civil War? The Civil War, lasting three years, began in 1918. It followed on from the First World War, which left Russia in a bad way, with economic problems, illness, starving of its people and ten million dead. The war began in the Spring of 1918, the Bolsheviks had seized power and they alone wanted to run Russia. Other members of the Soviet weren't happy about this, as they wanted a share of the power. So the Bolsheviks had almost every other political party in Russia and their supporters, against them. Despite the odds being stacked against them, the Bolsheviks, or the Red Army, as they were known, won the war. How did they do it? The war was a confusing period in which the sides weren't clearly defined, but there were three main forces. The Bolsheviks were known as the Reds, their army was made up of sailors and Red Guards, as well as workers and soldiers. ...read more.

This meant they were near to the railways for transport of troops and munitions. The bulk of the factories were in the area, so the Bolsheviks didn't have to worry about artillery and other military equipment. Cities were heavily populated which was good for conscription. The White armies were thousands of miles apart, Generals Yudenich and Deniken attacked from the west and Admiral Kolchak from the east. So communications and moving men was difficult. Trotsky was the founder and leader of the Red Guards and Red Army. Due to the White armies being so far apart, he could co-ordinate his forces much better and fight his enemies one at a time. Trotsky was a good war leader and strategist, so the Red Army had good tactics. Both of these factors contributed to the victory for the Bolsheviks. Another reason for the success of the Red army was belief. The Bolshevik soldiers were very enthusiastic, many of them were communists who believed they were fighting for a better world, some just fought because they hated the foreign armies invading Russia. ...read more.

They lost the support of the nationalist groups and the peasants seemed to favour the Reds because Lenin had promised that they would keep their land. Whereas the Whites wanted the land to be restored to it's previous owners. Workers and soldiers wanted to hold onto the gains that they had made in 1917, the Bolsheviks were more likely to let them. Lastly, foreign armies, such as the British and French, were brought in to help in the fight against Bolshevism. Although they did provide supplies for the White armies, they weren't very effective against the Bolsheviks. The soldiers were sick of war and didn't have much support. The Bolsheviks used the situation to their advantage and claimed that they were fighting for Russia, against foreign armies. So even though at the start of the Civil War, you would have expected the Bolsheviks to be defeated and their time in power short, they came through victorious. They were simply more organised, in a better position, had a better overall leader, were more motivated, were better disciplined, were well supported and their opponents weren't any of the above, they were divided. That's why the Bolsheviks won the war. ...read more.