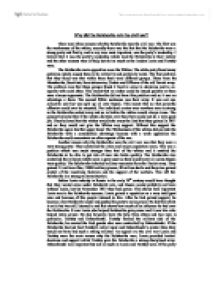 Why did the Bolsheviks win the civil war?

Why did the Bolsheviks win the civil war? There were three reasons why the Bolsheviks won the civil war. The first was the weaknesses of the whites, secondly there was the fact that the Bolsheviks were a strong party and finally, and in my view most important, was the party's leadership. I believe that it was the party's leadership which lead the Bolsheviks to their victory and the other reasons were of help but not as much as the leaders Lenin and Trotsky were. The Bolsheviks main opposition were the Whites. The white party faced many problems which caused them to be militarily and politically weak. The first problem that they faced was that within them there were different groups. These were the Mensheviks, Socialists, Revolutionaries, Cadets and Officers of the old Tsarist army. The problem was that these groups found it hard to come to decisions and to co-operate with each other. This meant that no orders could be issued quickly as there were always arguments. The Bolsheviks did not have this problem and so it was an advantage o them. ...read more.

The Bolsheviks inherited military resources from the Tsarist army. They gained 2.5 million rifles, 12000 artillery pieces, 28 million shells and they also gained control of the munitions factories and the support of the workers. This left the Bolsheviks in a strong military situation. Before Lenin nobody in Russia in the early 20th century would have thought that they would come under Bolshevik rule, and Russia would probably not have without Lenin, but by November 1917 they had power. This shows how important Lenin was to the Bolsheviks success. Lenin gained a reputation as a very intelligent man and because of this people listened to him. After he had gained support, he become a key Bolshevik leader and pushed his party to seize power. He did this whilst in exile but was still listened to and this shows how much of an influence he had over the Bolsheviks. It was Lenin who helped Bolsheviks gain power and it was him who helped retain power. He did, however, have the help from others and two men in particular, Trotsky and Dzherzhinski. Trotsky formed the military side of the Bolsheviks, he created the Red guards who were controlled by Dzherzhinski. ...read more.