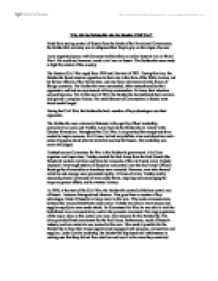 Why did the Bolsheviks win the Russian Civil War

Why did the Bolsheviks win the Russian Civil War? Fresh from seizing control of Russia from the hands of the Provisional Government, the Bolsheviks' next step was to safeguard their fragile grip on the reigns of power. Lenin negotiated peace with Germany and therefore an end to Russia's role in World War I. He could not, however, avoid a civil war in Russia. The Bolsheviks were made to fight for control of the country. The Russian Civil War raged from 1918 until the start of 1921. During this time, the Bolsheviks faced massive opposition to their rule in the form of the White Armies, led by former officers of the Tsarist state, and also from intervention by the forces of foreign countries. The Bolsheviks were surrounded, often outnumbered by their opponents, and had no experienced military commanders. At times, their situation seemed hopeless. Yet, by the start of 1921, the Bolsheviks had defeated their enemies and gained a complete victory. ...read more.

The large population of the major cities in this central area was a key resource for the Bolsheviks. The cities provided fresh recruitment for the Red Army. Furthermore, much of Russia's industry and raw materials was located in this area. This made it possible for the Bolsheviks to keep their troops supplied and equipped with weapons, ammunition and supplies. Under Lenin's leadership, the Bolsheviks displayed total ruthlessness in making sure that they did not face rebellion and revolt in the areas they controled. The Constituent Assembly, this had been organised by the Provisional Government, to draw up a constitution for Russia. In the election, the majority of delegates came from another revolutionary party, the Social Revolutionaries. Fearing opposition to their plans, when the Constituent Assembly attempted to meet, the Bolsheviks simply had it closed down. Other Parties, once the Civil War had started, the Bolsheviks banned the other political parties and arrested their leaders. ...read more.

The Bolsheviks were fighting for a very definite cause - the establishment and survival of a Communist Russia. The Whites, however, had problems motivating their troops and building up support. Why should soldiers face death simply to make Kolchak or Yudenich master of Russia? As time passed, more and more soldiers deserted from the White Armies. The government set up by the Whites in areas they controlled soon became corrupt and inefficient. For example, medical supplies sent by foreign countries often ended up being sold on the black market rather than being used to help the soldiers. White Army forces often behaved with great brutality and cruelty in areas they controlled. Towns were burned, property destroyed or stolen, peasant farmers' crops and livestock taken by force - if people objected, they faced torture and execution. Inevitably, the Whites became hated and feared because of this. Inevitably, Bolshevik propaganda homed in on this. Given the choice between the Bolsheviks or the Whites, it was hardly surprising that Bolshevik support increased dramatically. And the Bolsheviks easily won the war and took over Russia. ...read more.