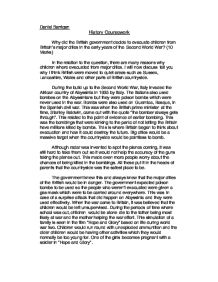 Daniel Barrigan History Coursework Why did the British government decide to evacuate children from Britain's major cities in the early years of the Second World War? (10 Marks) In the relation to the question, there are many reasons why children where evacuated from major cities. I will now discuss tell you why I think British were moved to quiet areas such as Sussex, Lancashire, Wales and other parts of British countryside. During the build up to the Second World War, Italy invaded the African country of Abyssinia in 1935 by Italy. The Italians also used bombes on the Abyssinians but they were poison bombs which were never used in the war. ...read more.

This made even more people worry about the chances of being killed in the bombings. All these put it in the heads of parents that the countryside was the safest place to be. The government knew this and always knew that the major cities of the British would be in danger. The government expected poison bombs to be used so the people who weren't evacuated were given a gas mask which were to be carried around everywhere. This was in case of a surprise attack that did happen on Abyssinia and they were used effectively. When the war came to Britain, it was believed that the children would be left unsupervised. ...read more.

My final point us the most important in my opinion. The government did not know how long it would take to defeat Germany and were scared if the next generation would be sparse when they came of age. The future was very important if they were needed in five years for maybe the war effort or even in the army. There were so many reasons for children being evacuated that not one could be picked out for the main reason as they are all valid reasons why evacuation was brought up is seen as I believe that all my reasons are important. I think this because I have backed them up with such things as sources and my own knowledge. I have even used films to back myself up. These all explain a good point and can be seen as valid points in my opinion. ...read more.