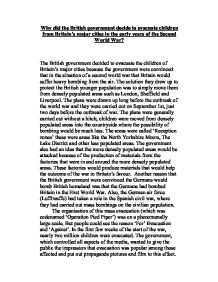 Why did the British government decide to evacuate children from Britain's major cities in the early years of the Second World War? The British government decided to evacuate the children of Britain's major cities because the government were convinced that in the situation of a second world war that Britain would suffer heavy bombing from the air. The solution they drew up to protect the British younger population was to simply move them from densely populated areas such as London, Sheffield and Liverpool. The plans were drawn up long before the outbreak of the world war and they were carried out on September 1st, just two days before the outbreak of war. ...read more.

These factories would produce materials that would help the outcome of the war in Britain's favour. Another reason that the British government were convinced the Germans would bomb British homeland was that the Germans had bombed Britain in the First World War. Also, the German air force (Lufftwaffe) had taken a role in the Spanish civil war, where they had carried out mass bombings on the civilian population. The organisation of this mass evacuation (which was codenamed 'Operation Pied Piper') was on a phenomenally large scale. But people could see the reason 'For' Evacuation and 'Against'. ...read more.

Many children were evacuated but not with huge enthusiasm and when it became apparent that war was not going to lead to cities being bombed. many children returned to the cities from which they had only recently left. The official government story was that all young children had been evacuated and that the whole process had been efficiently organised and executed with precision. However, this was not the whole story. Evacuated children found that their hosts were not always welcoming and that their two lifestyles clashed. Host mothers complained of inner city children urinating wherever they felt like it in a house; locals in rural areas complained of an increase of petty crime - theft from shops and the like. ...read more.