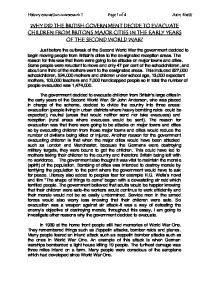 WHY DID THE BRITISH GOVERNMENT DECIDE TO EVACUATE CHILDREN FROM BRITONS MAJOR CITIES IN THE EARLY YEARS OF THE SECOND WORLD WAR?

belonging to Germany in Fighter Command eloped since World War One this worried people even more. RAF Hurricanes Spitfires August 21st 1940 615 326 The main fighter planes of the RAF were the Spitfire and the Hurricane. The Germans relied primarily on their Messcherschmitt fighters and their Junkers dive bombers - the famed Stukas. At the start of the war, Germany had 4,000 aircraft compared to Britain's front-line strength of 1,660. Relative strength of Germany before the outbreak of war in 1939 Inf. div. 46 Motor. div. 43/4 Light div. 4 Tank div. 7 Tanks 3200 Bombers 1176 Fighters 771 Scouting planes 356 Other planes 981 Battle-ships 2 Cruisers -- Destroyers -- Submarine 7 Little vessels -- Torpedo-boats -- So in conclusion Germany had much more tanks, Battle ships and planes than Britain so you can understand the fear and why they found necessary to evacuate. In 1937 during the Spanish civil war, between communist and anti-communist government, Hitler had this opportunity to fight communism but at the same time try out his new weapons and army. In the Spanish civil war German bombers had nearly completely destroyed the city of Guernica It alarmed people in Britain as 1,654 people were killed and 889 wounded. ...read more.

suffer a shortage in ammunition and other supplies also peoples morale would be down as a result of the heavy bombardment in Britain because children in major towns and cities were living in fear. I conclude that the British government evacuated children from major towns and cities in the early years of the Second World War to reduce the number of deaths and casualties in the war. They knew that there was going to heavy bombing because people knew what Hitler was capable of as he had shown them in the Spanish civil war. They also did this to maintain a workforce at the home front, this was essential for ammunition and other supplies for the war, and to maintain a high morale of women and Servicemen in the army; this would be maintained by them knowing that their children were safe which was a known tactic of winning wars. Another reason for evacuating children was to maintain population of children for the future generation. I think the main reason for evacuation was so the morale of children's parents would be high and so it was a way of winning the war this was a well known weapon for winning wars. Created by Asim Bhatti History evacuation coursework 1 Page 1 of 4 Asim Bhatti ...read more.