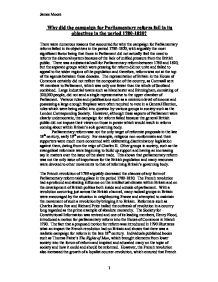 Why did the campaign for Parliamentary reform fail in its objectives in the period 1780-1820?

Why did the campaign for Parliamentary reform fail in its objectives in the period 1780-1820? There were numerous reasons that accounted for why the campaign for Parliamentary reform failed in its objectives in the period 1780-1820, with arguably the most significant factor being that those in Parliament did not actually feel the need to reform the electoral system because of the lack of unified pressure from the British public. There was a substantial call for Parliamentary reform between 1780 and 1820, but the separate groups which were pressing for reform did not unite and failed to appeal to the wider regions of the population and therefore, reform was not at the top of the agenda between these decades. The representation of Britain in the House of Commons certainly did not reflect the composition of the country, as Cornwall sent 44 members to Parliament, which was only one fewer than the whole of Scotland combined. Large industrial towns such as Manchester and Birmingham, consisting of 320,000 people, did not send a single representative to the upper chamber of Parliament. Various rules and qualifications such as a minimum level of income and possessing a large enough fireplace were often required to vote in a General Election, rules which were being called into question by various groups in society such as the London Corresponding Society. However, although these aspects of Parliament were clearly undemocratic, the campaign for reform failed because the general British public did not impose their views on those in power which would result in reform coming about within Britain's sole governing body. ...read more.

This led many of the more privileged in society to express the revolutionary activities in France as a threat to the nature of the British system, a system that had protected the rights and liberties of citizens with documents like the Bill of Rights in 1689. 'I would rather forgo for ever the advantages of reform, than risk for a moment the existence of the British constitution.' - Pitt the Younger Parliamentary reform was a topic which obviously brought about serious and hard fought out debates between those for and against such reforms and before the French revolution, it was a topic met with social acceptance and discussion would be tolerated. However, after the revolution in France, it no longer was a topic of discussion in terms of its influence on British politics. Reaction to the revolution made even those MP's who were in favour of an element of reform, totally hostile to the issue. The impact of the activities in France became even more significant on the chances of parliamentary reform when Britain engaged in a 22 year was with France in 1793. Those who had previously supported the French revolution as a step forward in democracy and supported the basic fundamental ideological principles of the revolution were portrayed and labelled as traitors. If a country is at war and there are citizens supporting the enemy to which thousands of lives are being lost each year, it seems as thought they are urging for ...read more.

They had a mass disliking to the concept of reform because their power until then had been based upon their patronage, land or aristocratic backgrounds. The removal of this power to command the lower classes was not acceptable and therefore the conservatives took a staunch view over the issue of reform. Several trade unions organised meetings in 1795 and this method of attempting to raise public support for parliamentary reform was hijacked by several radical groups and also endeavoured to try and intimidate those in authority. This led parliament to pass acts which banned future meetings, showing that parliament did not tolerate the slightest inclinations of activities which would threatened the British system of government. The government also had the backing of a large, well-organised and disciplined army which reduced the level of activities that radicals could carry out at street level. The fact that support for reform was generally concentrated in small areas meant that there was no realistic chance of any sort of uprising occurring as in France, because there wasn't consistent support for reform across the whole country. The main reason why parliamentary reform failed in its objectives from 1780 to 1820 was the fact that those in parliament, who were realistically the only collective group of individuals who would bring about reform, would only legislate for its own reform under threat. The simple fact of the matter was that the different groups arguing for reform did not threaten Parliament, as they did not wield a large support base and used different methods to achieve their different goals. James Moore 1 ...read more.