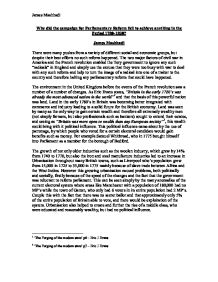 Why did the campaign for Parliamentary Reform fail to achieve anything in the Period 1780-1820?

Why did the campaign for Parliamentary Reform fail to achieve anything in the Period 1780-1820? James Mashhadi There were many pushes from a variety of different social and economic groups, but despite their best efforts no such reform happened. The two major factors of civil war in America and the French revolution enabled the Tory government to ignore any such "radicals" in England and simply use the excuse that they were too busy with war to deal with any such reform and help to turn the image of a radical into one of a traitor to the country and therefore halting any parliamentary reform that could have happened. The environment in the United Kingdom before the events of the French revolution saw a number of a number of changes. As Eric Evans states, "Britain in the early 1780's was already the most advanced nation in the world"1 and that the basis of this powerful nation was land. Land in the early 1780's in Britain was becoming better integrated with commerce and industry leading to a solid future for the British economy. Land was seen by many as the only way to gain certain wealth and therefore all extremely wealthy men (not simply farmers, but also professionals such as bankers) sought to extend their estates, and seeing as "Britain was more open to wealth than any European society"2, this wealth could bring with it political influence. ...read more.

The inspiration of revolution also helped to shape a new generation of lower and middle class radicals/reformists. The initial reaction of reformers like Charles James Fox was joyous as Fox says "How much the greatest event it is that ever happened in the world, and how much the best"3. There was also a motion for parliamentary reform in the House of Commons in 1784 by Henry Flood4; he argued that developments across the Channel had made reform more urgent than ever. However the parliamentary attitude towards the idea of reform because of French revolution began to harden quickly. Evidence of this can be seen through Edmund Burke's book "Reflections on the Revolution in France" published in 1791, which was written in the form of a long letter to a gentleman in Paris. This book was read all over Europe and encouraged its rulers to resist, his opposition to revolution cost him the support of his fellow Whigs such as Charles Fox. Thomas Paine then in 1792 published his book "The Rights of Man" in response to Burke's book, and it is said that "The publication of his Rights of Man is perhaps the single most important event in the history of British Radicalism"5. Perhaps the reason why his book was so successful was because I was written in a vivid and popular style which means it was more desirable to a wider audience. ...read more.