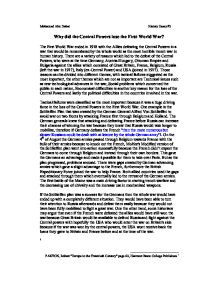 Mohannad Abu Dabat History Essay #2 Why did the Central Powers lose the First World War? The First World War ended in 1918 with the Allies defeating the Central Powers in a war that would be remembered by the whole world as the most horrible trench war in human history. There are a variety of reasons which led to the defeat of the Central Powers, who were at the time Germany, Austria-Hungary, Ottoman Empire and Bulgaria against the allies which consisted of Great Britain, France, Belgium, Russia (left the war in 1917), Italy (ex-Central Power) and USA (joined in 1917). Those reasons can be divided into different themes, with tactical failures suggested as the most important, the other themes which are not as important are Technical issues such as new technological advances in the war, Social problems which concerned the public in each nation, Economical difficulties is another key reason for the loss of the Central Powers and lastly the political difficulties in the countries involved in the war. Tactical failures were classified as the most important because it was a huge driving force in the loss of the Central Powers in the First World War. One example is the Schlieffen Plan that was created by the German General Alfred Von Schlieffen to avoid war on two fronts by attacking France first through Belgium and Holland. ...read more.

On the other hand, if the German offensives were more successful than the British and the French then there might have been a chance for the Central Powers to win the war. Another reason that can justify the grounds for The Central Powers losing the First World War is the weakness of Germany's allies, Austria-Hungary and the Turkish Empire. Both countries were huge empires with internal problems with diverse ethnic groups trying to gain independence. Furthermore, both countries wanted to go into war to decrease the unrest in the empire, this later backfired on them because by the end of the war, both lost their empires and new nations were set, such as Czechoslovakia, Hungary, Trans-Jordan and Palestine. This deeply affected Germany at the time of the war because it had unstable allies who can break away at any time. Moreover, Germany's allies were considerably weak compared with Britain and France and faced huge losses at different times in the war. Because of this, Germany was always forced to send reinforcements to these nations to help them which affected their own performance in the war. The following measures undoubtedly made Germany a weaker opponent in front of its enemies and therefore it was a solid reason for the Central Powers losing the First World War, which cannot be argued unless Germany had stronger and more efficient allies. ...read more.