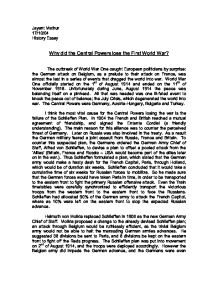 Why did the Central Powers lose theFirst World War?

Jayant Mathur 17/10/04 History Essay Why did the Central Powers lose the First World War? The outbreak of World War One caught European politicians by surprise: the German attack on Belgium, as a prelude to their attack on France, was almost the last in a series of events that dragged the world into war. World War One officially started on the 1st of August 1914 and ended on the 11th of November 1918. Unfortunately during June, August 1914 the peace was balancing itself on a pinhead. All that was needed was one ill-fated event to knock the peace out of balance; the July Crisis, which degenerated the world into war. The Central Powers were Germany, Austria-Hungary, Bulgaria and Turkey. I think the most vital cause for the Central Powers losing the war is the failure of the Schlieffen Plan. In 1904 the French and British reached a mutual agreement of friendship, and signed the Entente Cordial (a friendly understanding). The main reason for this alliance was to counter the perceived threat of Germany. Later on Russia was also involved in the treaty. As a result the German military feared a joint assault from Russia, France and Britain. To counter this suspected plan, the Germans ordered the German Army Chief of Staff, Alfred von Schlieffen, to devise a plan to offset ...read more.

However previously the Germans were also running a very successful U-Boat campaign. It was building up submarines to try and starve the British out of the war. Since Britain was more or less an island, it was not too difficult for the German U-Boats to cordon off Britain. This was a German attempt to destroy all the vessels bound for Britain, which might carry supplies. The German intent was clear; they planned to starve the British nation out of the war, by cutting off their supplies by sinking their supply vessels and sinking the allied war ships. On the 4th of February 1915 the Germans launched their first offensive which was aimed at allied and neutral merchant shipping in and around the waters of Britain. At that time a warning was given that the vessel was about to be sunk and the passenger were allowed to disembark from the vessel. However one infamous example of this rule being completely ignored was on the 7th of May 1915, off the coast of Ireland where a passenger liner, Lusitania, was sunk. 1,198 casualties were suffered, out of which 124 were Americans. Three more Americans were killed when another passenger liner, Arabic, was sunk by a U-Boat on the 19th of August 1915. ...read more.

On the contrary one attack and breakthrough at the Chemin des Dames, took the Germans straight to the river Marne, which was 40 odd miles from their ultimate objective: Paris. Ludendorff's forces were running quite thin and he had to attack soon if victory were to be his. So he tried attacking the village of Reims, on the 15th of July, where the French had taken up defensive positions, and was quickly defeated. Imperial Germany and the Central Powers had now been defeated and Europe had been retaken. Once again peace and prosperity prevailed in Europe thanks to the effort and sacrifices made by the allies. However the difficult step of agreeing on the respective treaties had arrived. Unfortunately a flaw in the Treaty of Versailles led to another World War in which millions of people were destined to die. There were however remnant forces of the Central Powers, none of which posed any real threat. The remnant forces of the Central Powers were not going to try to attack the allies because Imperial Germany (The Central Powers' Backbone) had been crushed and American soldiers were pouring into France at the rate of 300,000 a month. The Central powers had been mainly defeated for the reasons, which I stated above (the reasons which I found most reasonable). I placed these reasons in order according to their importance. ...read more.