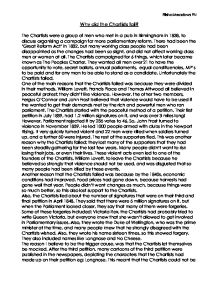 Why did the Chartists fail?

Why did the Chartists fail? The Chartists were a group of men who met in a pub in Birmingham in 1838, to discuss organising a campaign for more parliamentary reform. There had been the 'Great Reform Act' in 1832, but many working class people had been disappointed as the changes had been so slight, and did not affect working class men or women at all. The Chartists campaigned for 6 things, which later became known as The Peoples Charter. They wanted all men over 21 to have the opportunity to vote, secret ballots, annual parliaments, equal constituencies, MP's to be paid and for any man to be able to stand as a candidate. Unfortunately the Chartists failed. One of the main reasons that the Chartists failed was because they were divided in their methods. ...read more.

The rest of the supporters fled. This was another reason why the Chartists failed; they lost many of the supporters that they had been steadily gathering for the last few years. Many people didn't want to risk losing their jobs, or even their lives. These violent acts even led to one of the founders of the Chartists, William Lovett, to leave the Chartists because he believed so strongly that violence should not be used, and was disgusted that so many people had been killed by these events. Another reason that the Chartists failed was because by the 1840s, economic conditions had improved. Food prices had gone down, because harvests had gone well that year. People didn't want changes as much, because things were so much better, so this also lost support to the Chartists. ...read more.

This meant that the Chartists could not be taken seriously, and they lost the support of many people after this. Soon after, the Chartist movement collapsed. The reason that I believed was the main cause of the Chartist movement was the violence. It made the Chartists lose a lot of support, and the support of their founding members. Many people were killed, and a lot more injured. This made people too scared to get involved with the violence, and support the Chartists. I think that if they hadn't of used violence, they would have had a lot more supporters, and they would have not of lost William Lovett. They probably would of got a lot more signatures on their petitions, and Parliament may have passed their demands if they had been peaceful. ?? ?? ?? ?? Elisha Meadows 9N ...read more.