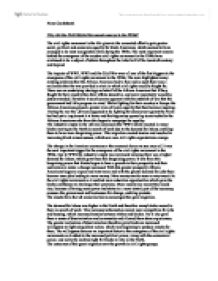 Why did the Civil Rights Movement emerge in the 1950s?

Why did the Civil Rights Movement emerge in the 1950s? The civil rights movement is the title given to the concerted effort to gain greater social, political and economic equality for black Americans, which seemed to have emerged in its most recognisable form during the 1950s. The most important reasons behind the emergence of the modern civil rights movement in the 1950s have continued to be a subject of debate throughout the latter half of the twentieth century and beyond. The impacts of WW1, WW2 and the Cold War were all one of the first triggers to the emergence of the civil rights movement in the 1950s. The wars highlighted many existing problems that the African American had to face and as such there was a realization that the war provided a crisis in which civil rights could be fought for. There was an underlying ideology on behalf of the African American that if they fought for their country then their efforts should be, and more importantly would be, justly rewarded. ...read more.

The results from the US economic boom encouraged the great migration. The demand for labour was higher in the North and therefore many blacks moved to there in search of work. This increased urbanisation meant more competition for jobs and housing, which increased tension between whites and blacks. Yet it also gave them a sense of discrimination and community and allowed them share experiences. The greater realisation of discrimination therefore gave blacks an increased willingness to fight using direct action, which was beginning to produce results for them. The willingness became an important factor to the emergence of the civil rights movements as it added to the increased political power, along with the economical power, and led to the enabled right for blacks to vote in the North. The outcomes of this great migration saw the growth in civil rights groups. This growth in civil rights organisations, such as the NAACP, would not have been possible without the economic boom, which gave blacks prosperity and led to higher economic positions meaning more funding. ...read more.

The media can be seen to of been very crucially linked to the Cold War and as it also covered national events such as the boycotts, it brought the issue of racism to the fore. However, the boost of the emergence of the civil rights movements in the 1950s, through the media, would not have been possible without the economic boom as an impact of WW2 which without the media would not have been capable of addressing the public and its audience. In my opinion I feel that the impact of the wars can be identified as the most important cause of the emergence of the civil rights movements. I feel that without the implications on the USA after the wars that the civil rights movement would not have been possible. I believe this as there would not have been an economic boom if the wars had not taken place and therefore no other cause, such as the great migration, the direct action from organisations and the media, would have been able to take place due to lack of funding, lack of prosperity and lack of economical status for African Americans. Fiona Crookshank ...read more.