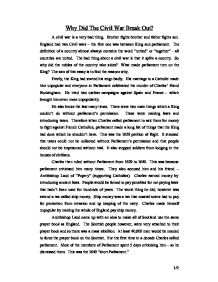 Why did the Civil War break out?

Why Did The Civil War Break Out? A civil war is a very bad thing. Brother fights brother and father fights son. England had two Civil wars - the first one was between King and parliament. The definition of a country almost always contains the word "untied" or "together" - all countries are united. The bad thing about a civil war is that it splits a country. So why did the nobles of the country take sides? What made parliament turn on the King? The aim of this essay is to find the reasons why. Firstly, the King had started his reign badly. His marriage to a Catholic made him unpopular and everyone in Parliament celebrated the murder of Charles' friend Buckingham. He tried two useless campaigns against Spain and France - which brought him even more unpopularity. He also broke the law many times. There were two main things which a King couldn't do without parliament's permission. ...read more.

Charles made himself unpopular by making the whole of England pay ship money. Archbishop Laud came up with an idea to make all of Scotland use the same prayer book as England. The Scottish people however, were very attached to their prayer book and so there was a mass rebellion. At least 40,000 men would be needed to force the prayer book on the Scottish. For the first time in a decade Charles called parliament. Most of the members of Parliament spent 5 days criticising him - so he dismissed them. This was the 1640 "short Parliament." Charles was forced to call parliament as the Scottish rebels had crossed the border. This "Long Parliament" sat for thirteen years and destroyed his life's work. They paid the Scots to go away and now concentrated on defeating Charles' friends. Thomas Wentworth - the Earl of Strafford had a large army in Ireland and was a good friend of Charles. ...read more.

A main reason why Charles was unpopular with Parliament was that he believed in divine right. This meant that he was often arrogant and believed that he was always right. He did not believe that Parliament was the main power in England and broke the law many times using the excuse of divine right. In summary, there were a large number of reasons which made Charles unpopular, the most important of which was religion. He tried to support Catholics in a Protestant country at a time when religion was very important. One might say that it was luck - he might not have been such a bad king if he hadn't ruled in Protestant times. In conclusion, the civil war broke out in 1642 because Charles I had a major argument with parliament. There are many reasons for this, any one of which would not make such a large argument. However, with all of Charles' law-breaking, quarrels with parliament and unpopular actions added together, the only result possible was CIVIL WAR. Gopal K Kotecha 1/2 ...read more.