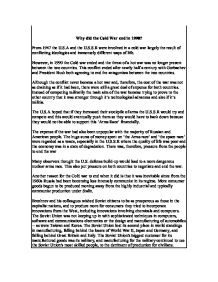 Why did the Cold War end in 1990? From 1947 the U.S.A and the U.S.S.R were involved in a cold war largely the result of conflicting ideologies and immensely different ways of life. However, in 1990 the Cold war ended and the threat of a hot war was no longer present between the two countries. This conflict ended after nearly half a century with Gorbachev and President Bush both agreeing to end the antagonism between the two countries. Although the conflict never became a hot war and, therefore, the cost of the war was not as draining as if it had been, there were still a great deal of expense for both countries. ...read more.

There was, therefore, pressure from the people to end the war Many observers thought the U.S. defense build-up would lead to a more dangerous nuclear arms race. This also put pressure on both countries to negotiate and end the war. Another reason for the Cold war to end when it did is that it was inevitable since from the 1960s Russia had been becoming less intensely communist in its regime. More consumer goods begun to be produced moving away from the highly industrial and typically communist production under Stalin. Brezhnev and his colleagues wished Soviet citizens to be as prosperous as those in the capitalist nations, and to produce more for consumers they tried to incorporate innovations from the West, including innovations involving chemicals and computers. ...read more.

The Soviet Union had no independently wealthy individuals looking to bankroll a new business with a new idea. In the Soviet Union it was the central government that was doing the investing, not only in the military but also in social programs, including spending money to keep bread available and at a low price, while money to modernize manufacturing was often lacking. Gorbachev planned to improve the economy by reducing military spending. Gorbachev saw U.S. leaders as rational, as not interested in destroying the Soviet Union through war and as wanting to avoid a nuclear holocaust. Gorbachev believed that the capitalist powers were not in need of restraint provided by the Soviet Union. ...read more.