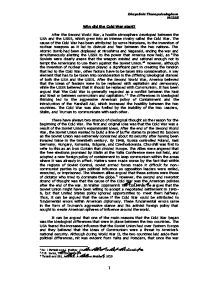 Why did the Cold War start

Why did the Cold War start? After the Second World War, a hostile atmosphere developed between the USA and the USSR, which grew into an intense rivalry called the Cold War. The cause of the Cold War has been attributed by some historians, to the invention of nuclear weapons as it led to distrust and fear between the two nations. The Atomic Bomb had been displayed at Hiroshima and Nagasaki, ending the war and simultaneously alerting the USSR to the power that America now held, as "The Soviets were clearly aware that the weapon existed and rational enough not to tempt the Americans to use them against the Soviet Union."1 However, although the invention of nuclear weapon played a significant part in creating the tension that led to the Cold War, other factors have to be taken into consideration. A key element that has to be taken into consideration is the differing ideological stances of both the USA and the USSR. After the Second World War, America believed that the ideas of fascism were to be replaced with capitalism and democracy, while the USSR believed that it should be replaced with Communism. ...read more.

"In Washington and Rome, General Marshall and Ambassador Dunn maintained that emergency assistance would be predicated on the exclusions of communists from that government."7 The introduction of the Marshall Plan further angered the Soviet Union as they considered the move as a clear attack upon communism. The Soviet Union saw the introduction of the plan as a cover for American Imperialism and at the UN, the Soviet representative, Vyshinsky said that 'the plan is an attempt to split Europe into two camps and to complete the formation of a bloc several European countries hostile ... to the Soviet Union.'8 This shows that the Soviet Union felt that the USA was planning to use economic aid as weapon against them by breaking down the defences that they had built. An immediate and important factor that can be attributed as the cause of the Cold War was the invention of nuclear weapons, and the subsequent Arms Race between the USA and USSR. After Truman had informed Stalin of it successful invention of the Atom Bomb at the Potsdam conference, 'Stalin ordered a telegram sent to those working on the atomic bomb in Russia to hurry with the job.'9 The use of the bomb to ...read more.

The USSR, on the other hand feared the invention of nuclear weapons, which until 1949, was solely in the hands of the USA, as they believed America 'intended to use the atomic weapon for the purpose of achieving its Imperialist goals.'16 The suspicious nature of the two countries also meant that their outlooks on events differed. 'Each side had their own interpretation of the other's actions - what one side considered self-defence, the other side interpreted as aggression.'17 This can be seen in evidence by the fact that the USSR believed that in taking control of Eastern Europe, they would be able set up a defence barrier but the same actions were considered by America as to be Soviet communist expansion. In conclusion, it has to be said that although individually each factor can be argued as the cause of the Cold War, it has to be seen that all the factors linked together to create the conditions, which led to the Cold War. However, it has to be concluded that the main reason and cause behind the Cold War was the differing ideological differences between the two main rival countries. Although 'there were many reasons for the post-1945 Cold War, underpinning them all was the fundamentally opposed political beliefs of the western allies and the Soviet Union'. ...read more.