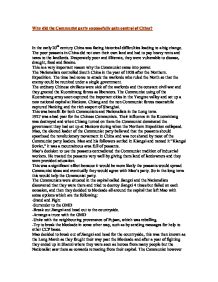 Why did the Communist party successfully gain control of China?

Why did the Communist party successfully gain control of China? In the early 20th century China was facing historical difficulties leading to a big change. The poor peasants in China did not own their own land and had to pay heavy rents and taxes to the landlords. Desperately poor and illiterate, they were vulnerable to disease, draught, food and famine. This is a very important reason why the Communist came into power. The Nationalists controlled South China in the year of 1928 after the Northern. Expedition. The time had come to attack the warlords who ruled the North so that the enemy could be reunited under a single government. The ordinary Chinese civilians were sick of the warlords and the constant civil war and they greeted the Kuomintang forces as liberators. The Communist using of the Kuomintang army soon captured the important cities in the Yangtze valley and set up a new national capital at Hankow. ...read more.

-Try to break the blockade in some other way, such as by sending messages for help to other CCP bases. Mao decided to break out of Jiangxi and head for the countryside, this was then known as the Long March as they fought their way past the Blockade and after a year of fighting they ended up in Shanxi where they were seen as heroes from many people but the Nationalist saw them as cowards retreating from their capital. The Communist however thought that this was a victory as they were propagandizing and telling people on their way. I think this was an important cause but it was an indirect approach because it took a while for the people to gain support for the Communists. Chiang Kai-Shek was full of contradictions. He relied on Western support, but he did not like Europeans. He claimed to be the defender of Chinas independence but he made little effort to drive the Japanese out of China. ...read more.

Even though the Communists were supported by a further two million part-time militiamen, the odds seemed to be stacked against them. In fact, the reasons for the Nationalist defeat are not hard to find. The Communists were particularly strong in the countryside where they had extended their authority and control throughout the years of the Japanese occupation. When the Japanese withdrew in 1945 the Communists controlled an area with 150 million inhabitants. The towns and cities, which were therefore like islands, isolated in a Communist controlled sea. When the civil war started they were picked off one by one. All of these reasons in the above lead to the most important reason for Chiang's defeat. This was his loss of support in the towns and cities. The Communist went through struggles but they all led to step by step victory. That's why the Communists gained power of China in 1949. Presented by Soreen Hussain ...read more.