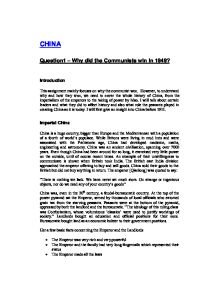 CHINA Question1 - Why did the Communists win in 1949? Introduction This assignment mainly focuses on why the communist won. However, to understand why and how they won, we need to cover the whole history of China, from the imperialism of the emperors to the taking of power by Mao. I will talk about certain leaders and what they did to affect history and also what role the peasants played in creating China as it is today. I will first give an insight into China before 1911. Imperial China China is a huge country, bigger than Europe and the Mediterranean with a population of a fourth of world's populace. While Britons were living in mud huts and were associated with the Prehistoric age, China had developed medicine, maths, engineering and astronomy. China was an ancient civilisation, spanning over 7000 years. Even though China had been around for so long, it exercised very little power on the outside, until of course recent times. An example of their unwillingness to communicate is shown when Britain took India. The British east India division approached the emperor offering to buy and sell goods. China sold their goods to the British but did not buy anything in return. The emperor [Qianlong] was quoted to say: "There is nothing we lack. We have never set much store. On strange or ingenious objects, nor do we need any of your country's goods" China was, even in the 20th century, a feudal-bureaucratic country. At the top of the power pyramid sat the Emperor, served by thousands of local officials who extorted grain tax from the starving peasants. Peasants were at the bottom of the pyramid, oppressed by both the landlord and the bureaucratic. "The ideology of this ruling class was Confucianism, whose voluminous 'classics' were used to justify workings of society." Landlords bought an education and official positions for their sons. ...read more.

Mao's political views on peasants were by far different then Chiang. Chiang hardly ever commented on the peasants and when he did, it was not intended to show support for them, but to comment on how they are there to be sued as slaves for his army. Personally, I think the biggest turning point for Mao's party was the invasion of China by Japan. Mao agreed that they should join sides with the GMD to fight the Japanese. Unfortunately, Chinag was reluctant but after persuauisson he decided to unite to fight the Japanese. Chiang Kaishek briefly fought the Japanese. In the first year of the war, his armies were driven out of the cities and deep inland. From then until 1945 the GMD undertook no major initiatives against the Japanese. Chou Enlai said: "The first day of the anti-japanese war will mean the beginning of the end for Chiang Kaishek." Chiang had lost his base in the costal cites and he did not dare mobilize the peasants as he feared they would turn against him. However, the foreign countries still recognized Chiang as the head of state in China and therefore supplied him with arms and troops. However, Chiang held back. He knew that the Japanese would be defeated and therefore held back from fighting and save his military might for after the war when he would once again go back to attacking the communists. Unfortunately this was a very bad manoeuvre in the long run. The people of China saw what Chiang was doing and compared him to Mao's army, who were putting all there power into defending the Chinese people. This brought about hatreds toward Chinag and his government resulting in tens of thousands Red Army. "Mao's areas of control grew to cover nearly 100 million people. The Red Army expanded to between 500,000 and 1 million troops." However, even when the war had ended, the GMD still outnumbered the CCP by 3 to 1. ...read more.

Unfortunately, the people who broke out were the workers, not the peasants. That is why, until Mao conquered, the peasants had still been under the ruthless law's of the Landowners even after the revolution. Only the industrial workers had been more independent. However, Chiang didn't realise that the body of China was the peasants. He thought he could control the body by a similar way to before, but just under a new name. Once people started to realise that they could do something about this, they started to rebel( Mao). However, the un-educated didn't know anything else than before and that is why they succumbed to Chiang's way. That was why Mao needed to show the peasants that they could actually make a difference. If he used force and violence, then they would be like blind sheep, and the intellectuals would turn their backs on him, and only see another emperor greedy for power. The way to the peasants was through education and understanding. Once they understood, then they would flock to him like bee's to honey. Once Mao showed the peasants that they were the one's in charge, they could make a difference and that they could lead a better life, that's when Mao would win. And he did. " In a short time <...> several million peasants will ride like a mighty storm, like a hurricane, a force so swift and violent that no power, however great, will be able to hold it back. They will smash all the trammels that bind tem and rush forward along the road to liberation. They will sweep all the imperialists, warlords, corrupt officials, local tyrants and evil gentry into their graves. Every revolutionary comrade will be put to the test to be accepted or rejected as they decide. There are three alternatives. To march at their head and lead them? To trail behind them gesticulating and criticizing? Or to stand in their way and oppose them? Every Chinese is free to choose, but events will force you to make the choice quickly." "A revolution is not a dinner party" ...read more.