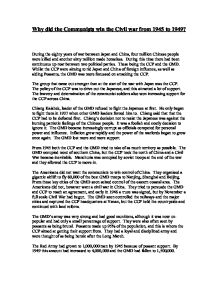 Why did the Communists win the Civil war from 1945 to 1949? During the eighty years of war between Japan and China, four million Chinese people were killed and another sixty million made homeless. During this time there had been continuous up-roar between two political parties. These being the CCP and the GMD. Whilst the CCP were aiming to rid Japan and China of foreign influence, as well as aiding Peasants, the GMD was more focussed on attacking the CCP. The group that came out stronger than at the start of the war with Japan was the CCP. The policy of the CCP was to drive out the Japanese, and this attracted a lot of support. The bravery and determination of the communist soldiers also won increasing support for the CCP across China. ...read more.

The Americans did not want the communists to win control of China. They organised a gigantic airlift to fly 80,000 of the best GMD troops to Nanjing, Shanghai and Beijing. From these key cities of the GMD soon seized control of the eastern coastal area. The Americans did not, however want a civil war in China. They tried to persuade the GMD and CCP to reach an agreement, and early in 1946 a truce was signed, but by November a full scale Civil War had begun. The GMD soon controlled the railways and the major cities and captured the CCP headquarters at Yanan, but the CCP held the countryside and continued with land reform. The GMD's army was very strong and had good munitions, although it was now un-popular and had only a small percentage of support. ...read more.

The GMD acted as bullies to helpless peasants, which lost them support. Another reason, to why the CCP won was that Manchuria, which contained much of China's raw materials, was occupied by Russian troops but then taken over by the CCP during 1946. This meant that the GMD army garrisons in Manchuria became isolated and had to surrender to the CCP. From autumn 1947 the tide began to turn against the GMD. Its cities had started to become isolated and many more troops began to surrender. This put vast stores of equipment in the hands of the CCP. The final collapse of the GMD and victory for the communists came in 1948. Many of the soldiers from the GMD were leaving for Mao. Chiang eventually resigned as president of the GMD in January 1949, he fled to Formosa were he set up the country of Taiwan. The PLA entered Beijing and on the 1 October 1949, Mao Zedong proclaimed the People's Republic of China. ...read more.