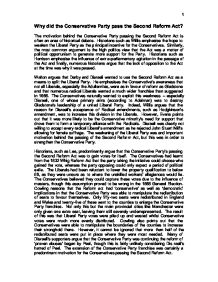 Why did the Conservative Party pass the Second Reform Act?

Why did the Conservative Party pass the Second Reform Act? The motivation behind the Conservative Party passing the Second Reform Act is often an area of historical debate. Historians such as Willis emphasise the hope to weaken the Liberal Party as the principal incentive for the Conservatives. Similarly, the most common argument is the high politics view that the Act was a matter of political opportunism to generate more support for the Party. Historians such as Harrison emphasise the influence of extra-parliamentary agitation in the passage of the Act and finally, numerous historians argue that the lack of opposition to the Act at the time was why it was passed. Walton argues that Derby and Disraeli wanted to use the Second Reform Act as a means to split the Liberal Party. He emphasises the Conservative's awareness that not all Liberals, especially the Adullemites, were as in favour of reform as Gladstone and that numerous radical Liberals wanted a much wider franchise than suggested in 1866. ...read more.

Only fifty-two seats were redistributed in England and Wales and twenty-five of these went to the counties to enlarge the Conservative Party franchise. Not only this but the main provincial cities like Manchester were only given one extra seat, leaving them still severely underrepresented. The result of this was that Liberal Party votes were piled up and wasted whilst Conservative votes were much more evenly distributed. Cowling also points out that the Conservatives were able to manipulate the boundaries of the counties to increase their stronghold there. However, it cannot be ignored that more than half of the redistributed seats were put in place where they were most needed. Many of Disraeli's supporters argue that the Conservative Party was continuing the reform of 'proven abuses' began by Peel, though this is fairly unlikely considering Disraeli's hatred of Peel. The extension of the Conservative Party franchise was certainly a predominant motivation for the Conservatives passing the Second Reform Act. ...read more.

Historians also argue that the Act was initially much more moderate than the 1866 Bill had been and so it was able to gain the support of both the Conservative backbench and the Adullemites, who caused the defeat of the 1866 Bill - though it became much more radical once it had been through Parliament. The lack of opposition to the Reform Act allowed it to be passed but the Conservatives as a group were much more motivated by other factors, like self-aggrandisement. It cannot be said that one reason alone caused the Conservatives to pass the Second Reform Act. However, it does seem that the hope of increasing Conservative seats was the predominant motivation as the Party was in a minority at the time. With this, of course, also came the weakening of the Liberals, which was especially important to Disraeli. The lack of opposition to the Act created a situation in which it was possible to be passed, but this did not cause its passing. The popular pressure for reform did elevate the issue of reform, but it did not necessarily make it politically viable as the opportunity to manipulate the Act did. 1 ...read more.