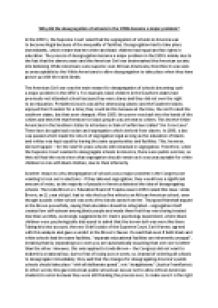 Why did the desegregation of schools in the 1950s become a major problem?

﻿Why did the desegregation of schools in the 1950s become a major problem? In the 1950?s, the Supreme Court ruled that the segregation of schools in America was to become illegal because of the inequality of facilities. Desegregation had to take place immediately, which meant that the white and black children had equal and fair rights in education. The process of desegregation became a major problem in the 1950s mainly due to the fact that the slavery years and the American Civil war brainwashed the American society into believing White Americans were superior over African Americans, therefore it was seen as unacceptable by the White Americans to allow desegregation to take place when they have grown up with the racist ideals. The American Civil war was the main reason for desegregation of schools becoming such a major problem in the 1950?s. For example, black children in the Southern states had previously not attended school because they were slaves and they did not own the right to an education. President Lincoln was all for destroying slavery and the Southern blacks enjoyed their freedom for a time; they could do this because at the time, the north ruled the southern states, but that soon changed. ...read more.

Taking this into account, the new Chief Justice of the Supreme Court, Earl Warren, agreed with this analysis and gave a verdict in the Brown?s favour. He said that even if both black and white schools had the same facilities, ?separate educational facilities are inherently unequal?, meaning that by separating two races you are automatically assuming that one race is better than the other. However, this only applied to Linda Brown ? the Congress did not want to make this a national law, due to fear of losing out on votes, so, instead of ordering all schools to desegregate immediately, they said that the changes for desegregating America?s public schools should take place ?with all deliberate speed?, not ?straightaway? (Justice Frankfurter). In other words, this gave American public schools an excuse not to allow African American students to enrol because they were still thinking the process over, to make sure it is the right thing to do. Through this, the Congress was not losing out on votes from the public because it was clear that desegregation would take a lot of years to be fully accepted by all the schools in America. ...read more.