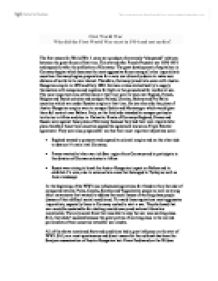 First World War Why did the First World War start in 1914 and not earlier? The first reason for World War 1 came as a product of extremely "sharpened" relations between the great forces of that time. This started after French-Prussian war 1870-1871 and especially after the unification of Germany. The great development of capitalism in Germany begins which becomes the most aggressive force among all other imperialistic countries. Germany begins preparations for a new war driven by desire to make new division of world in its own interest. Therefore, Germany joined into union with Austro-Hungarian empire in 1879 and Italy 1882. German armies started hastily to supply themselves with weapons and logistics for fight on the ground and for warfare at sea. ...read more.

wanted to take over rich Saar region from Germany and to participate in the division of German colonies in Africa * Russia was aiming to break the Austro-Hungarian impact on Balkan and to establish it's own, also to seize certain areas that belonged to Turkey as well as Asian landscape At the beginning of the WW1 also influenced aspirations for freedom from the side of conquered nations: Poles, Czechs, Slovaks and Yugoslavian people as well as strong labor movements that wanted to address the social issues of working class people (issues of their difficult social conditions). To avoid these aspirations most aggressive imperialists, especially those in Germany rushed to start a war. They believed that war would be sustainable for choking revolutionary and national-liberation movements. ...read more.

Austro-Hungarians were not satisfied by this response of Serbian government. Although in the dispute between Austro-Hungarian empire and Serbian government were involved great world forces the conflict wasn't solved because Germans decided to use this conflict to start a war. That is how on the 28.June 1914 Austro-Hungarians declared a war to Serbia. Only three days after this declaration Germany declared a war to Russia on the 1.August 1914 and to France on the 3.August same year. The day after, on the 4.August 1914 England declared a war to Germany. Step by step, other countries declared the state of war .On the side of Central force penetrated Turkey and Bulgaria and on the side of ENTENTE were Japan, Italy, Romania etc. Thirty-three countries participated in the First World War with 1,5 billion inhabitants . ...read more.