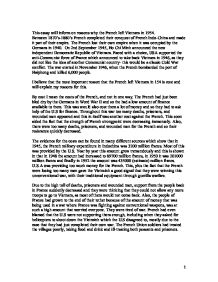 Why did the French leave Vietnam in 1954?

This essay will inform on reasons why the French left Vietnam in 1954. Between 1870's-1880's French completed their conquest of French Indo-China and made it part of their empire. The French lost their own empire when it was occupied by the Germans in 1940. On 2nd September 1945, Ho Chi Minh announced the new independent Democratic Republic of Vietnam. Faced with a choice, USA supported the anti-Communist force of France which announced to take back Vietnam in 1946, as they did not like the idea of another Communist country- this would be a classic Cold War conflict. The war started in November 1946, when the French bombarded the port of Haiphong and killed 6,000 people. I believe that the most important reason that the French left Vietnam in 154 is cost and will explain my reasons for this. By cost I mean the costs of the French, and not in one way. The French had just been bled dry by the Germans in Word War II and so the had a low amount of finance available to them. ...read more.

Due to the high toll of deaths, prisoners and wounded men, support from the people back in France suddenly decreased and they were thinking that they could not allow any more troops to go to Vietnam, as most of them would not come back. Also, the people of France had grown to the end of their tether because of the amount of money that was being used in a war where France was fighting against conventional weapons, was at such a high amount that worried everyone. They were tired of war. French had even blamed that the U.S were not supporting them enough, including when they asked for helicopters to shoot down the Vietminh which the U.S disagreed to, mostly due to the case that they had just completed their own war. The French Union soldiers had treated the villages poorly, taking food and drink and ill-treating both peasants and prisoners. Due to the fact that the French were not going to be supported by the Vietnamese so they could not strengthen their army any longer and this would add to another success of Vietnamese. ...read more.

The fact that two sides had developed was classic Cold War history. We can see that the cost to France was a significant point in making them choose to leave Vietnam in 1954. This was linked to other things such as the support they got from different factors. These were also vital in them losing at Dien Bien Phu which was a short term cause of France's retreat from Vietnam. In 1954 French quickly retreated due their last strongpoint being overrun by the Vietminh. I believe that the most important trigger for this was the cost towards the French which then triggered other factors, which all led to them being overrun. To summarise, French support was weak due to the cost, their army and knowledge was weak due to them not getting much support except from U.S.A, and finally their army was too weak which led to them losing at Dien Bien Phu. And last but not least, French themselves were being too greedy trying to get Vietnam back, who had turned independent then and so the Vietminh with no compensation fought for their country and beat the French. ?? ?? ?? ?? 1 ...read more.