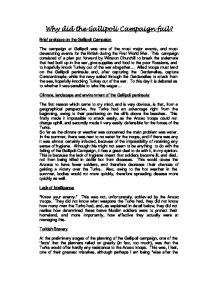 Why did the Gallipoli Campaign fail

Why did the Gallipoli Campaign fail? Brief prologue on the Gallipoli Campaign The campaign at Gallipoli was one of the most major events, and most devastating events for the British during the First World War. This campaign consisted of a plan put forward by Winston Churchill to break the stalemate that had built up in the war, give supplies and food to the poor Russians, and to hopefully knock Turkey out of the war altogether... Allied troops must land on the Gallipoli peninsula and, after capturing the Dardanelles, capture Constantinople, while the navy sailed through the Dardanelles to attack from the sea, hopefully knocking Turkey out of the war. To this day it is debated as to whether it was sensible to take this wager... Climate, landscape and environment of the Gallipoli peninsula The first reason which came to my mind, and is very obvious, is that, from a geographical perspective, the Turks had an advantage right from the beginning, owing to their positioning on the cliffs above the beaches. This firstly made it impossible to attack easily, as the Anzac troops could not charge uphill, and secondly made it very easily defensible for the forces of the Turks. ...read more.

Turkish Bravery At the preliminary stages of the planning of the Gallipoli campaign, one of the 'facts' that the planners relied on greatly (in fact, too much), was that the Turks would offer hardly any resistance to the Anzac troops. This was, I feel, one of their greatest mistakes, although perhaps I am being "wise after the event". The whole of their plan, it seems, was based around the idea of the Turks being weak, feeble and not at all brave. One general is recorded to have said "I don't order you to attack, I order you to die." It became stalemate, similar to the Western Front At Gallipoli, the trench system used on the Western Front was quickly adopted, and a similar stalemate between the two enemies developed there. Many people were dying on both sides, the Turks mown down by machine guns, but also the Anzac troops by close contact fighting and disease. "The wounded were so numerous that it had been impossible to cope with them all and many had lain there for days..." - Private Leonard Hart, Otago Infantry battalion, New Zealand. ...read more.

Bad Decisions There were many bad decisions made throughout the whole campaign, the first and most obvious is that it was decided to carry out the campaign. Some people also believe that the British used the worst of their commanders and generals in order not to lose any good ones. They believe that had they used a soldier with the correct type of experience instead of sixty-one year old General Stopford, the whole outcome of the campaign could have been totally different. This however is a debated subject. Another bad decision was, in my opinion, to attack the straits first. Although I, not knowing much about tactics of warfare, might be making a totally ludicrous suggestion, it would perhaps have been better for the troops to land on the beaches first, so that the Turks were not so prepared for the attack, and then attack over the sea afterwards so as to confuse the Turks, rather than warning them of attack, which is what actually happened. Brief Epilogue on the Gallipoli Campaign. Eventually in winter 1915, the troops were evacuated from Sulva, Cape Helles, and Anzac Cove. The Gallipoli Campaign was a failure and Winston Churchill was humiliated. ...read more.