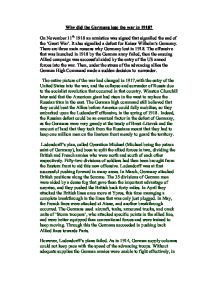 Why did the Germans lose the war in 1918? On November 11th 1918 an armistice was signed that signalled the end of the 'Great War'. It also signalled a defeat for Kaiser Wilhelm's Germany. There are three main reasons why Germany lost in 1918. The offensive that was launched in 1918 by the German army failed, then the ensuing Allied campaign was successful aided by the entry of the US armed forces into the war. Then, under the stress of the advancing allies the German High Command made a sudden decision to surrender. The entire picture of the war had changed in 1917,with the entry of the United States into the war, and the collapse and surrender of Russia due to the socialist revolution that occurred in that country. Winston Churchill later said that the American giant had risen in the west to replace the Russian titan in the east. The German high command still believed that they could beat the Allies before America could fully mobilise, so they embarked upon the Ludendorff offensive, in the spring of 1918. Indeed, the Russian defeat could be an eventual factor in the defeat of Germany, as the Germans were very greedy at the treaty of Brest-Litovsk and the amount of land that they took from the Russians meant that they had to keep one million men on the Eastern front merely to guard the territory. Ludendorff's plan, called Operation Michael (Michael being the patron saint of Germany), had been to split the allied forces in two, dividing the British and French armies who were north and south of each other respectively. ...read more.

The first British attack was headed by over 400 tanks including new, quicker 'Whippet' light tanks and air support. The attack was a complete success, with some German units reporting almost complete 'annihilation' of the German defending divisions. General Ludendorff later described 8th August as 'a black day of the German Army in the history of this war'. It was during these offensives that Allied commanders learnt the tactic of attacking the weak points in the line, whereas they had been attacking the strong points, inflicting high casualties on their own men for very little gain. There was then a succession of short and sharp attacks from the Allied Troops that successfully pushed the Germans back. On the 21st August the British Third Army attacked between Arras and Albert, though success was limited at first due to the caution exercised by the Third Army. Soon, however, the attack was joined by the British Fourth Army; the Somme battlefield was taken within the matter of a weekend. Five days later it was the British First Army that attacked German positions on the River Scarpe. Soon New Zealanders and Australians brought rapid successes to this impressive tally. It was this rapid succession of blows that began to wear down the German army both physically and emotionally. It was now clear that the allied strategy was to launch limited and separate attacks all along the front, rather than the German approach of using a single movement for all of its forces, as in Operation Michael. ...read more.

Every 24 hours that pass may make our position worse...' The lies that had been told by the High command of German success very suddenly became apparent. Soon Prince Max, the new German Chancellor, sent a document to President Woodrow Wilson asking for an armistice based on his 'Fourteen Points'. The German request for the armistice caught many in the Allied chain of command by surprise, for example Winston Churchill and Sir Henry Wilson were hastily drawing up plans for the offensives of 1919. Soon the Kaiser had abdicated and fled to Holland. On the 11th November an armistice was signed and on this note the bloody and horrific Great War was ended. We can see here that there were many factors that contributed to the German defeat in 1918. The failure of Operation Michael was an important point in the weakening of German forces and aided the ensuing Allied counter-attack, which was in fact successful. These factors along with the internal disruptions in Germany led to a breakdown in the German command. This I think is the key issue in the German defeat and indeed for many years German historians claimed that the army had been 'stabbed in the back' by its commanders. The Allied offensive had finished far from Germany and so it would seem that the German fighting spirit was lost; causing the panic in the German command. The other factors that I have mentioned in the essay mainly contributed to the afore mentioned points, for example the entry of the USA aided the stand against Operation Michael and aided the counter-offensive that followed. The failure of Germany's allies precipitated the collapse of German High Command. ...read more.