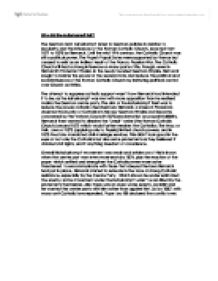 WHY DID THE KULTURKAMF FAIL

Why did the kulturkampft fail? The German term Kulturkampft refers to German policies in relation to secularity and the influence of the Roman Catholic Church, enacted from 1871 to 1878 by Bismarck. Until the mid-19th century, the Catholic Church was still a political power. The Pope's Papal States were supported by France but ceased to exist as an indirect result of the Franco-Prussian War. The Catholic Church still had a strong influence on many parts of life, though, even in Bismarck's Protestant Prussia. ...read more.

The aim of the kulturkampft itself was to reduce the power catholic churches had, Bismarck, a staunch Protestant, doubted the loyalty of Catholics in his new German Empire and became concerned by the Vatican Council's 1870 proclamation on papal infallibility. Bismarck then wanted to dissolve the "Jesuit" order (the Roman Catholic Church) around 1872 which would further weaken the Catholics. The May, or Falk, Laws of 1873 (applying only to Prussia) ...read more.

Bismarck started to retreate in the face of strong Catholic resistance, especially by the Centre Party. Which shown he under estimated the enemy, some movement under the kulturkampft wasn't even liked by the protestants themselves. Also there was an even worse enemy, socialist and he wanted the centre party with him rather than against him. So by 1887, with many anti-Catholic laws repealed, Pope Leo XIII declared the conflict over. ...read more.