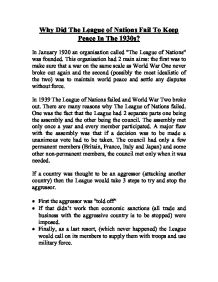 Why Did The League of Nations Fail To Keep Peace In The 1930s?

In 1921 it had solved a dispute between Germany and Poland over Upper Silesia, helped refugees after the war and fought against slavery. As time went on though and countries started to recover from the First World War the league lost its hold on power. This was probably because the U.S.A. didn't join the League (even though it was Woodrow Wilson the President of the U.S.A's idea) and without the strongest country in the world it was never really going to be a success. In 1931 the Japanese (a permanent member of the council) captured the Chinese province of Manchuria, attacked Shanghai and took over the province of Jehol. The reason for this invasion (according to the Japanese) was that their railway had been taken over and they had to defend it. ...read more.

The Abyssinian King appealed to the League and the L eague decided that Italy was the aggressor. Italy ignored the "telling off" and this time some economic sanctions were put into use but oil was not sanctioned so Italy could still power its army. Britain and France could have also limited Italy's supplies by not letting them go through the Suez Canal. In the end Britain and France gave Italy parts of Abyssinia but Italy went and conquered Abyssinia all the same. The only thing that the League of Nations accomplished by failing to stop these aggressors was to encourage other countries to see how much they could break the rules. In the case of Adolf Hitler (who broke just about every rule possible) he once said, "if they had tried to stop me at the beginning I would have failed". ...read more.