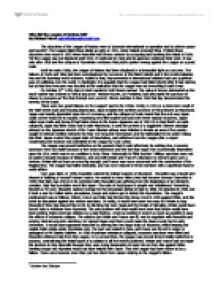 Why did the League of Nations fail?

Why did the League of Nations fail? By Richard Ward wattsvilleblues@hotmail.com The objectives of the League of Nations were to 'promote international co-operation and to achieve peace and security'. The League failed these ideals as early as 1921, when Poland occupied Vilna. It failed these objectives once more in 1923 when Mussolini held Greece ransom by occupying and bombing the island of Corfu. Yet the League was not dissolved until 1946. It continued to meet and its agencies continued their work. It was only after 1936 and the collapse of Abyssinian resistance that public opinion swung against the League on a great scale. Until the early 1930s, the League of Nations had been displayed in a favourable light as a success. The failures at Corfu and Vilna had been overshadowed by successes at the �land Islands and in the Greek-Bulgarian war and the booming world economy. Added to that, improvements in international relations had cast a general aura of wellbeing over the world. In hindsight, it is arguable that the League had failed shortly after it had started, but at that time everyone was shocked at the realisation that the League was not everything it said it was. On October 24th 1929, the US stock market in Wall Street crashed. The value of shares plummeted as the stock market was ordered to 'sell at any price'. Herbert Hoover, US President, had advocated the purchase of shares by everyone as 'the final triumph over poverty'. ...read more.

Economic sanctions damaged the country delivering as much as the one on the receiving. Had economic sanctions been utilised to any significant extent during the depression, it would have been financial suicide on the part of the country employing them. Military sanctions were proven ineffective by the Japanese invasion of Manchuria in 1931. First of all, Japan was on the other side of the world, a strategic nightmare for co-ordinating French and British troops. Secondly, it is questionable as to whether both countries would have been in the slightest bit interested in trekking to the other side of the world to fight a battle that they would undoubtedly lose. Both countries were suffering enough from the depression without the added financial burden of funding an expeditionary force to Japan. Wilson's 'Moral Force' also did not have any effect upon disarmament. Members of the League were not truly committed; this was proved by the actions of France and Germany in the Geneva Disarmament Conference of 1932-4. France, concerned with Hitler's 'new' Germany and German rearmament, would not disarm on the grounds of national security. Hitler withdrew Germany from the League in 1933 in order to rearm without commitment to the disarmament articles. "President Wilson had come to Europe with a program of peace for all men. His ideal was a very high one, but it involved great difficulties, owing to these century-old hatreds between some races."4 Georges Clemenceau The absence of the United States definitely made a difference to the League - it was the only major world power outside the League. ...read more.

This prompted Mussolini to turn aggressive, thus reminding Hitler that there were two great Fascists at the time. Yet if just one of these causes (long or short term) had not been present, would the League have worked? If there had been sufficient trust between member states and Germany, then there is a very real chance that the League would have succeeded. If there had been trust, though, the assassination of the Archduke Ferdinand would not have resulted in the cataclysmic series of events that followed. There would have been no Great War, no Armistice, no fourteen points, no Treaty of Versailles and so on. Some people might argue that the American economy was doomed to failure at some point or other (what goes up must come down etc.) and Hitler was always going to exploit it to its full potential. If Hitler had not risen to power, and the Japanese economy had not collapsed, then the League would have had nothing to trouble it. Such are the complexities of counterfactual history. The League failed in the long term as a result of the deeply ingrained mistrust on the part of its member states, and in the short-term as a result of the Wall Street crash, the depression and ensuing events. 1 Modern day Ethiopia 2 'THE WAY TO PEACE: Wilson and the League of Nations' by Sanderson Beck 3 65 Congress, 3 Session, Senate Document No. 389, pp. 12 4 'THE WAY TO PEACE: Wilson and the League of Nations' by Sanderson Beck ...read more.

This is a thorough response, with excellent knowledge of the key developments in the League's failure during the 1930s. Occasionally unnecessary narrative precedes the analysis but points are well explained and evaluated. 5 out of 5 stars.