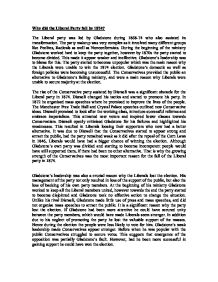 Why did the Liberal Party fall by 1874? The Liberal party was led by Gladstone during 1868-74 who also assisted its transformation. The party makeup was very complex as it involved many different groups like Peelites, Radicals as well as Nonconformists. During the beginning of the ministry Gladstone worked hard to keep the party together, however by 1870s the party started to become divided. This made it appear weaker and ineffective. Gladstone's leadership was to blame for this. The party started to become unpopular which was the main reason why the Liberals were unable to win the 1874 election. Gladstone's domestic as well as foreign policies were becoming unsuccessful. The Conservatives provided the public an alternative to Gladstone's failing ministry, and were a main reason why Liberals were unable to secure majority at the election. The rise of the Conservative party assisted by Disraeli was a significant obstacle for the Liberal party in 1874. Disraeli changed his tactics and started to promote his party. In 1872 he organised mass speeches where he promised to improve the lives of the people. The Manchester Free Trade Hall and Crystal Palace speeches outlined new Conservative ideas. Disraeli promised to look after the working class, introduce successful reforms and embrace imperialism. ...read more.

His reforms started to become unpopular among the public and cause disunity in the party. Some of his policies could be considered as effective, like the Administrative and Law reform, because they were popular among the masses, at the same time they caused loss of backing from the traditional Whigs. Towards the end of his ministry his policies started to become less effective. In 1872 he introduced the Licensing Act, which resulted in restriction of consumption and purchase of alcohol. It caused a deprivation of freedom and was highly unpopular among the party and the public. The Trade Union act also proved ineffective and angered the working class, whereas the Education act, which made the church be less influential, made Gladstone unpopular with the religious groups and the Church itself. The party members were becoming divided in their opinion of Gladstone's policies and the party feel mainly because of that. Each law he introduced was unpopular with one section of the party, the landed gentry were annoyed about loss of influence, whereas the lower classes felt no enough was achieved for them. Therefore both started to look for other alternatives. Although his policies were not popular, Gladstone would have had a bigger chance of success if the growing opposition was not so strong and people didn't have an alternative to turn to. ...read more.

His involvement in Ireland was a feeble attempt to unite the members of the Liberal party together, but instead failed and caused loss of public support. It was significant in the Liberal defeat of 1874 because if Gladstone handled it more effectively it would have brought back his old supporters and united the party. Although it was significant, its effects would not have been as fatal if Gladstone's previous leadership would have been more effective and the Conservatives didn't constant keep highlighting Gladstone's mistakes. Therefore the Conservatives were the main reason why the Liberals feel. Not only they provided and alternative for the people but also ensured that the public turned towards them by highlighting the opposition's mistakes. There were many factors which resulted in Liberals failing to secure majority in the election. Gladstone's party started to become less popular due to his ineffective domestic and foreign policy. Many of his policies also divided up the party which made it appear weak and turned the voters against them. His involvement in Ireland was the final straw which caused the people to turn to another leader. However, all these mistakes would not have been as significant if it wasn't for the Conservative party. Disraeli highlighted Gladstone's mistakes in his speeches and promoted Conservative ideas, which made his party appear strong. People were provided with an alternative to turn to, if it wasn't for that Gladstone's ministry would have had a larger chance of succeeding. ...read more.