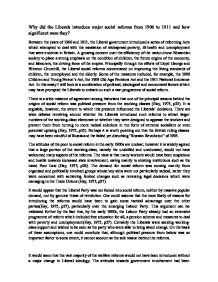 Why did the Liberals introduce major social reforms from 1906 to 1911 and how significant were they?

Why did the Liberals introduce major social reforms from 1906 to 1911 and how significant were they? Between the years of 1906 and 1911, the Liberal government introduced a series of reforming Acts which attempted to deal with the escalation of widespread poverty, ill-health and unemployment that were endemic in Britain. A growing concern over the efficiency of the nation drove Edwardian society to place a strong emphasis on the condition of children, the future engine of the economy, and labourers, the driving force of the empire. Principally through the efforts of Lloyd George and Winston Churchill, the Liberal social reforms concentrated on improving the living standards of children, the unemployed and the elderly. Some of the measures included, for example, the 1908 Children and Young Person's Act, the 1908 Old Age Pensions Act and the 1911 National Insurance Act. In this essay I will look at a combination of political, ideological and economical factors which may have prompted the Liberals to embark on such a vast programme of social reform. There is a wide measure of agreement among historians that one of the principal reasons behind the origins of social reform was political pressure from the working classes (Hay, 1975, p25). It is arguable, however, the extent to which this pressure influenced the Liberals' decisions. ...read more.

It would seem that the vast majority of the welfare reforms would not have been introduced without a major change in Liberal ideology. The attitudes towards government involvement had been largely uniform across the political spectrum for the best part of the nineteenth century: minimum state intervention and an emphasis on individual self-help. In 1884, the Liberal leader William Gladstone's stated: If the Government takes into its hand that which the man ought to do for himself, it will inflict upon him greater mischiefs than all the benefits he will have received (Watts, 1995, p128). However, by the late 1880s, a new interpretation of Liberalism had gradually been forming, drifting away from the traditional approach of laissez-faire politics (Watts, 1995, p129). This shift in ideology was in part influenced by the developments in the British economy. By the late nineteenth century, both Germany and the United States were starting to overtake Britain in industrial production (Hay, 1975, p29-30). In the light of this uncertain economic situation, the Liberals had to redefine themselves in order to maintain Britain's status as a competitive nation. Whilst still identifying themselves with the core values of Liberal ideology, that is to say individual liberty and enterprise, proponents of 'New Liberalism' envisioned a greater role for the state in safeguarding the lower classes (Watts, 1995, p129). ...read more.

Churchill argued: It supplies at once the highest impulse and the practical path. By sentiments of generosity and humanity, by the process of moderation, Liberalism enlists on the side of progress [hundreds of thousands] whom a militant Socialist party would drive into violent Tory reaction. It is through the agency of the Liberal Party alone that Society will in the course of time slide forwards almost painlessly ... We are all agreed that the State must concern itself with the care of the sick, of the aged and, above all, of the children. I do not wish to limit the vigour of competition, but to mitigate the consequences of failure (Watts, 1995, p144). It would also be useful to see these reforms as a response to the problems which follow the expansion of a capitalist economy (Hay, 1975, p62). It could be argued that, whether the Liberal reforms were calculated responses to individual social problems or whether they were part of a wider movement of gradual improvement, they helped 'sew the seeds' of future state-sponsored reforms. However, the limitations of these early Liberal attempts to ameliorate the conditions of the working classes were clearly shown in the difficult economic circumstances of the 1920s/30s. Memories of pre-war poverty helped Clement Atlee win a landslide Labour victory in 1945, clearly suggesting there was an appetite for more far-reaching reforms. It was now that a Labour government could establish a coherent and comprehensive Welfare State. ...read more.