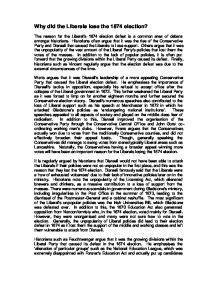 Why did the Liberals lose the 1874 election?

Why did the Liberals lose the 1874 election? The reason for the Liberal's 1874 election defeat is a common area of debate amongst historians. Historians often argue that it was the rise of the Conservative Party and Disraeli that caused the Liberals to lose support. Others argue that it was the unpopularity of the vast amount of the Liberal Party's policies that lost them the votes of the masses. In addition to the lack of popular policies, it is often put forward that the growing divisions within the Liberal Party caused its defeat. Finally, historians such as Vincent regularly argue that the election defeat was due to the external circumstances of the time. Watts argues that it was Disraeli's leadership of a more appealing Conservative Party that caused the Liberal election defeat. He emphasises the importance of Disraeli's tactics in opposition, especially his refusal to accept office after the collapse of the Liberal government in 1873. This further weakened the Liberal Party as it was forced to limp on for another eighteen months and further secured the Conservative election victory. ...read more.

There were numerous scandals in government during Gladstone's ministry, including irregularities in the Post Office in the summer of 1873, leading to the dismissal of the Postmaster-General and a cabinet reshuffle. The most significant of the Liberal's unpopular policies was the Irish Universities Bill, which Gladstone was defeated over. In addition to this, the 1870 Education Act also generated opposition from Nonconformists who, in the 1874 election, voted mainly for Disraeli. However, they were unorganised and many were not sure how to vote in the election. Generally, the unpopularity of Liberal policies did lead to their election defeat in 1874 as it lost them the support of the middle and working classes and left them vulnerable to attack from Disraeli. Historians such as Feuchtwanger argue that it was the growing divisions within the Liberal Party that caused its defeat in the 1874 election. He emphasises the 'alienation of particular groups' such as the National Education League, which was extremely disappointed with Forster's Education Act and actually put up candidates to run against Liberal candidates in the 1874 elections, a large amount of whom were successful. ...read more.

The depression also countered the Liberals initial reputation for being good financiers and creating a prosperous nation. The Trade Union revolt increased social unrest, which also reflected badly on the government and lost them support, though this was initiated as a response to the Trade Union Act and the Criminal Law Amendment Act passed by the Liberals. There was also a growing labour movement that, partly because of these Acts, supported the Conservatives and therefore lost support for the Liberals. Overall, external circumstances did lessen Liberal support, though social unrest did start as a result of the unpopularity of some Liberal measures. On the whole, it was the unpopularity of Liberal reforms that caused the Liberals to lose the 1874 election. These lost much of the Liberals' support from the middle and working class and left the Party open to attack from Disraeli. A large amount of Liberal reforms also alienated groups within the Party, causing and widening numerous divisions. In addition to this, some reforms generated social unrest from groups who did not see any immediate benefit, which further weakened the Liberal Party and lost it enough votes for the Conservatives to win the election with a comfortable majority. ...read more.

This is a concise and highly accurate answer that focuses on the question throughout and offers evaluative points that are very well supported by evidence. Use of historiography and consideration of counter-arguments strengthens it further. 5 out of 5 stars.