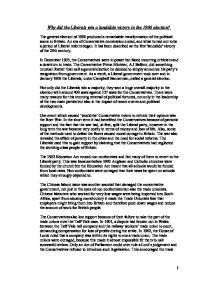 Why did the Liberals win a landslide victory in the 1906 elcections?

Why did the Liberals win a landslide victory in the 1906 election? The general election of 1906 produced a remarkable transformation of the political scene in Britain. An era of Conservative domination ended, and what turned out to be a period of Liberal reform began. It has been described as the first 'landslide' victory of the 20th century. In December 1905, the Conservatives were in power but faced mounting criticism and a downturn in trade. The Conservative Prime Minister, A.J Balfour, did something unusual. Rather than call a general election he decided to simply announce his party's resignation from government. As a result, a Liberal government took over and in January 1906 the Liberals, under Campbell Bannerman, called a general election. Not only did the Liberals win a majority, they won a huge overall majority in the election with around 400 seats against 157 seats for the Conservatives. There were many reasons for this stunning reversal of political fortunes, not only in the leadership of the two main parties but also in the impact of recent events and political developments. ...read more.

The Conservatives also lost support because of their failure to take the part of the trade unions over the Taff Vale case. In 1901, a dispute had broken out in Wales between the Taff Vale rail company and the railway workers' trade union to court, demanding compensation for loss of profits during the strike. In 1902, the House of Lords ruled that a company was within its rights to sue a trade union. The trade unions were outraged, because this made it almost impossible fir them to call successful strikes. Only an Act of Parliament could over rule a Lord's judgement and the Conservatives refused to introduce such legalisation. This encouraged the trade unions support for the idea of a labour group in parliament and for campaigning against the Conservatives in the election. However the biggest Conservative misjudgement came over Tariff Reforms. In 1903, the tariff reform campaign was launched in Birmingham by Joseph Chamberlain. ...read more.

The Liberals were also united behind a banner of Free Trade. During the electoral campaign in 1906, the Liberals exploited this commitment. Free Trade was a 'bread and butter' issue of great concern to voters in all classes. In conclusion, The Liberals were able to exploit Conservative mistakes in regard to the trade unions, by promising to ensure trade unions could not be sued for striking (Trade Disputes Act 1906). They could also win nonconformist votes by exploiting Conservative misjudgement over education and licensing, as well as by promising Welsh Disestablishment. Irish voters in Britain were more likely to vote Liberal due to their support for Home Rule rather than the anti-home rule Conservatives. For these reasons Liberals attracted votes from people who were dissatisfied with the Conservative government and instead looked to the best alternative, which at the time were the Liberals. So although it could be said that the Conservatives effectively 'threw away' votes, the Liberal party did well to offer a better alternative and win by a landslide. DOM ANSELL ?? ?? ?? ?? 1 ...read more.